I recently wrote about how the Apple Watch changed my relationship with other devices, even after just a couple of days.

I’ve now been wearing the device for a week: all day, every day, just going about my routine. I want to share a few observations on how I use it, and how it fits into my life.

As a writer, I work from home full-time, and my weekends aren’t very different from weekdays. My daily schedule looks like this:

I put the Watch on as soon as I get out of bed, and keep it on through both of my morning workouts. I take the Watch off when I go for a shower, leaving it on the charger (just because I don’t want to wear it in the shower). Once I’m ready, I put it back on again, and it stays on my wrist until I’m going to bed. It’s on the charger overnight.

Wherever I go and whatever I’m doing (except sleeping, or showering), the Watch is along for the ride. I wanted to explore how the device would affect or enhance my life, and the only way to do that is to live with it.

After a week, it’s become part of my outfit. I don’t even notice it anymore – until it taps me on the wrist.

It’s an Apple product - so it’s predictably gorgeous. Even the box is a thing of beauty; sort of a made-in-Cupertino version of the packaging for a decent mid-range timepiece. 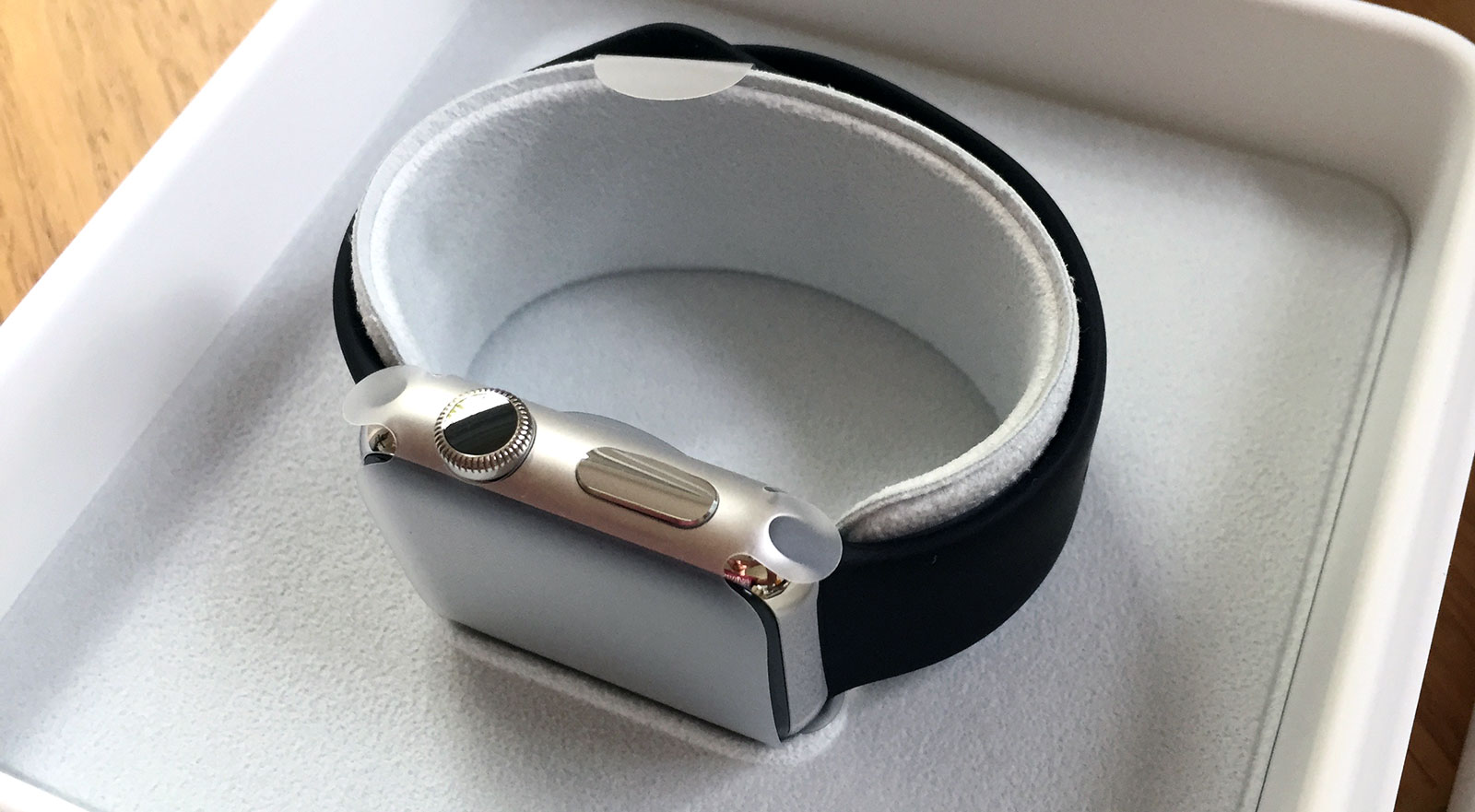 One thing that’s particularly welcome for UK residents is that there’s a new folding charger, finally slimming down the most annoying (and potentially foot-impaling) object in my bag. 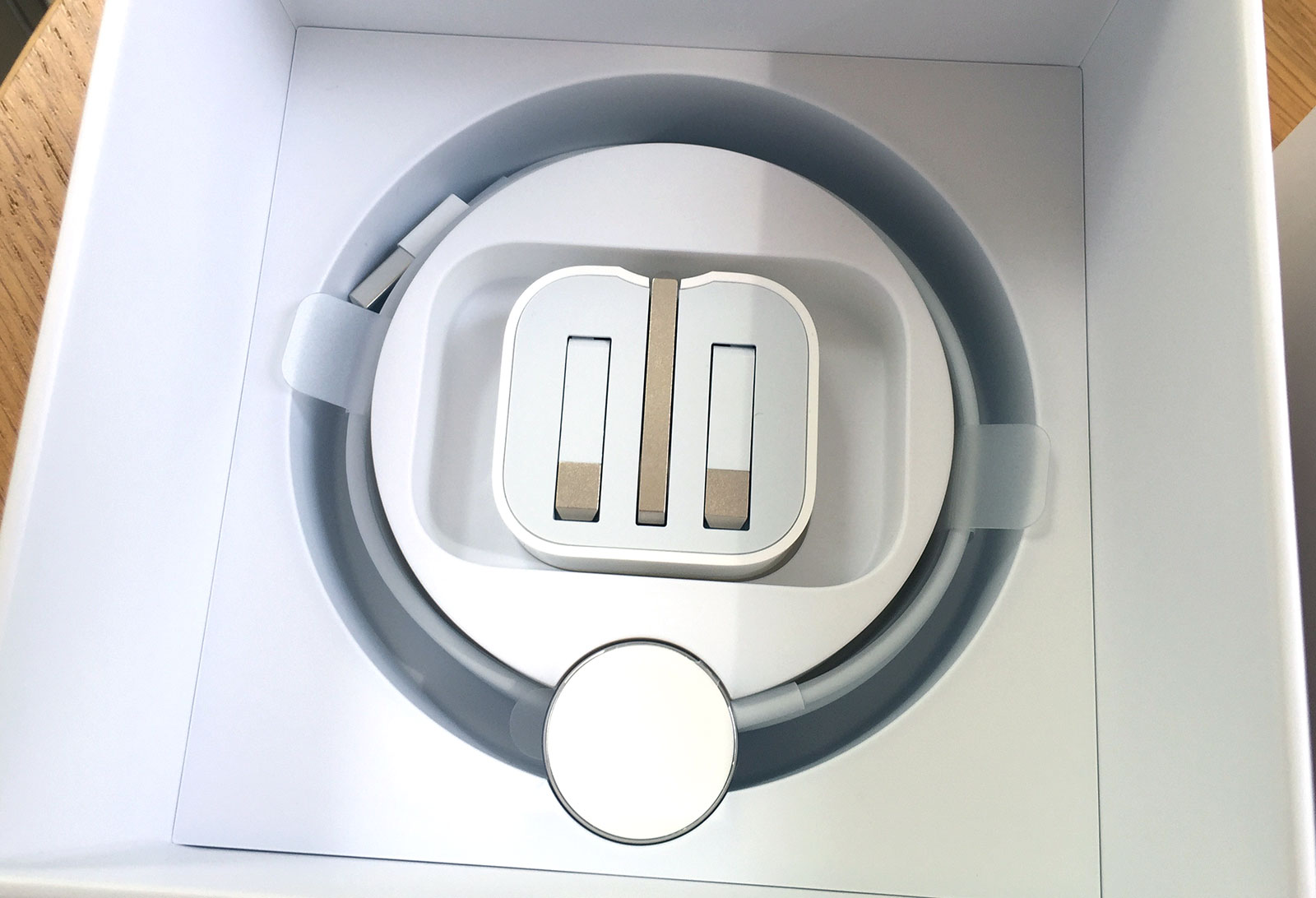 You can even buy the folding charger separately.

The box for the Watch is surprisingly heavy: it has a weighted base, as does the magnetic charging cable. The cable is finished in metal if you buy the regular Watch, or plastic if you have the Sport. If you buy a spare charger cable on its own, you’ll get a metal one.

It’s a lovely, boutique-y ownership experience; even more so than we’ve come to expect from Apple products. This is clearly a device that’s trying to walk the line between technology and jewellery.

The Watch quite openly tries to modify how you approach your day, mostly regarding physical activity. I’ve been serious about fitness for a year and a half now, and do at least two hours of workouts every day, so I was sceptical about how useful the Watch’s fitness features would be.

As it turns out, I’ve now become a slave to these things: 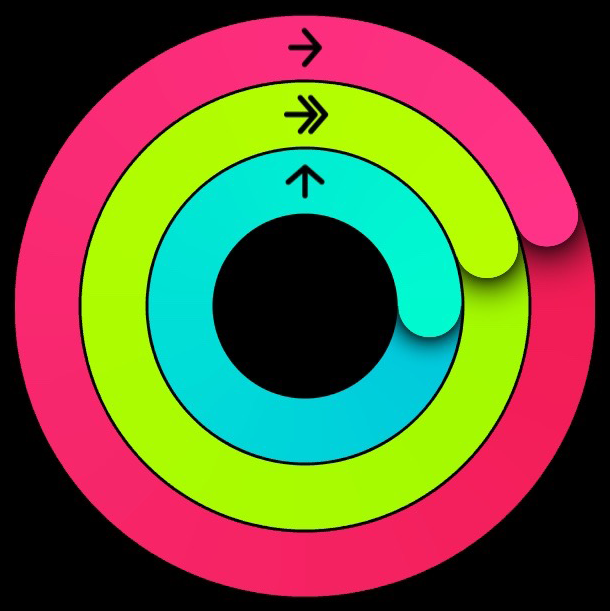 The Watch wants you to do at least 30 minutes of exercise each day, to stand up and move around for at least one minute in each of twelve hours per day, and also to burn a given number of calories which you can choose for yourself. It reminds you at ten minutes before the hour if you haven’t stood up in the last fifty minutes (at WWDC in June, just wait until the keynote hits its fiftieth minute - there will be PING sounds from all over the audience).

Filling the Activity rings has a compulsive quality to it, especially when you consider that there are awards for hitting certain milestones, complete with on-screen medals. Making sure to fit in all twelve hours of Stand goals has become a particular obsession of mine. My wife and I have a pretty rigid schedule already (we both incorporate a lot of exercise into our daily routines), but I think that if you were having issues with sleeping in, or skipping exercise, you might be surprised how motivating it can be for your wristwatch to gamify basic fitness.

As well as the generally-recommended activity levels that the Watch nudges you towards, you can of course also do actual workouts, using one of a set of predefined profiles. For my morning exercise bike session, I use the “Indoor Cycle” workout profile, with constant heart-rate monitoring on. Since there’s no way to input pace or resistance, and there’s no GPS data to use (because I’m not moving), I’ve found that the calories burned are underestimated considerably: by a factor of between 2 and 2.5. I don’t see that as a big problem because my bike gives me its own figures, but it’d be nice if Apple let us enter more parameters for indoor workout profiles in future.

I’ve also decided not to worry about sweating into it during workouts (it’s rated as IPX7 for water resistance), because I know Apple have tested it to destruction in that regard. I do give it a wipe down whenever I take it off, and I’d recommend a Sport band if you’re going to be using it during workouts regularly. You don’t want to wreck a leather strap.

I’ve found that having the device on has reinforced my schedule, and the hourly reminders to get up tend to keep the mind fresh. Now I’ll be back in a moment; it’s just ticked past 4 PM.

I’ve noticed a few interesting things about how I use the Watch, some of which are contrary to my expectations. Firstly, I almost never visit the Home screen, or use apps (except Workouts). The Home screen is pretty, and a nice toy to play with for a few minutes, but it’s not great for finding things. 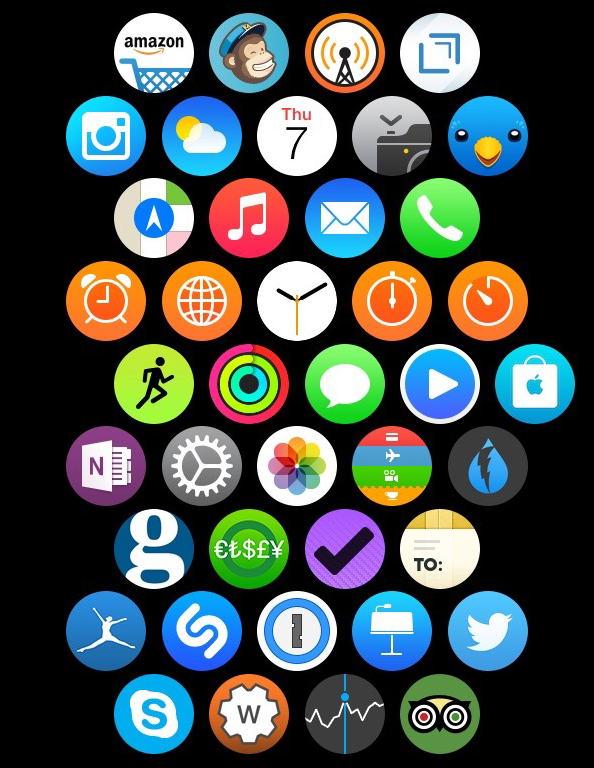 I tend to just use my Glances instead. I’ve even trimmed down the Glances list quite a bit: the only ones there are the music controls, Dark Sky for weather, and Calendar.

For the first couple of days I also used the Battery and Activity glances, but I found that adding relevant complications to my chosen watch face got rid of the need to swipe the face to view the appropriate glance.

I’ve accidentally bumped the Watch against a couple of things, for example when lifting weights. There’s still not a mark on it, presumably because of the sapphire crystal screen. I’m gradually learning that there’s no need to baby this thing.

Digital Touch is a fun distraction, but that’s about it. It’s mostly for occasional sketches between friends; I don’t use it for actual communication. The screen on my 38mm model is small but workable for quickly scribbling with a fingertip. I’ve yet to convince my wife to trade up from her Michael Kors, so I can exchange heartbeats with her. 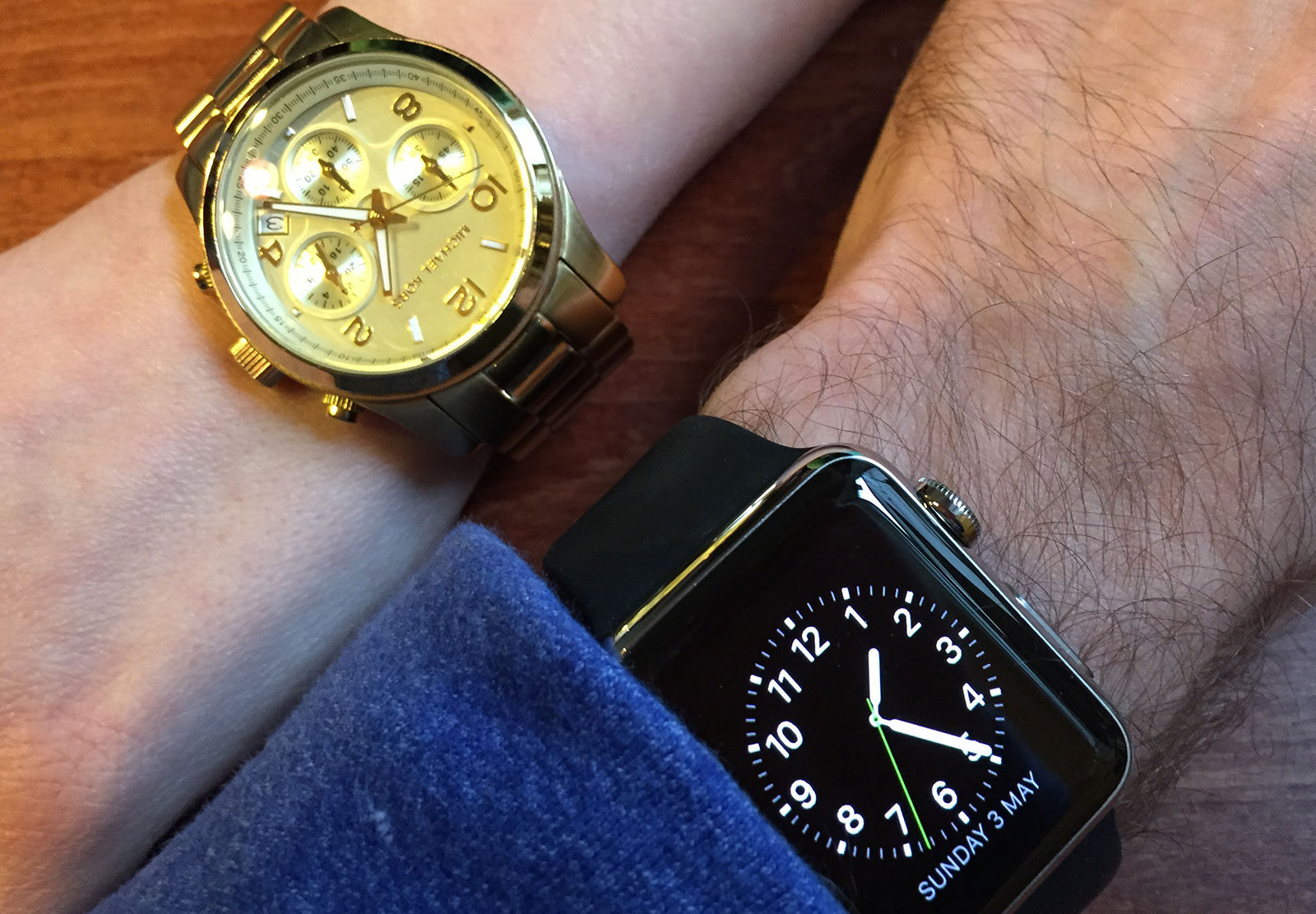 When I’m out walking, I now use the music controls glance instead of the awful headphone-button thing. I’m a frequent track-skipper, and it’s not easy to accurately double-squeeze (to skip forwards) or triple-squeeze (backwards) the combined microphone and button segment on Apple’s headphone cords. Particularly when you’re walking in Edinburgh, and your hands are a little clumsy in the cold breeze.

I haven’t settled on a watch face, and I think that’s normal - you’re supposed to switch faces whenever the mood takes you. I change my watch face once or twice a day, and I like to match the highlight colour to what I’m wearing. 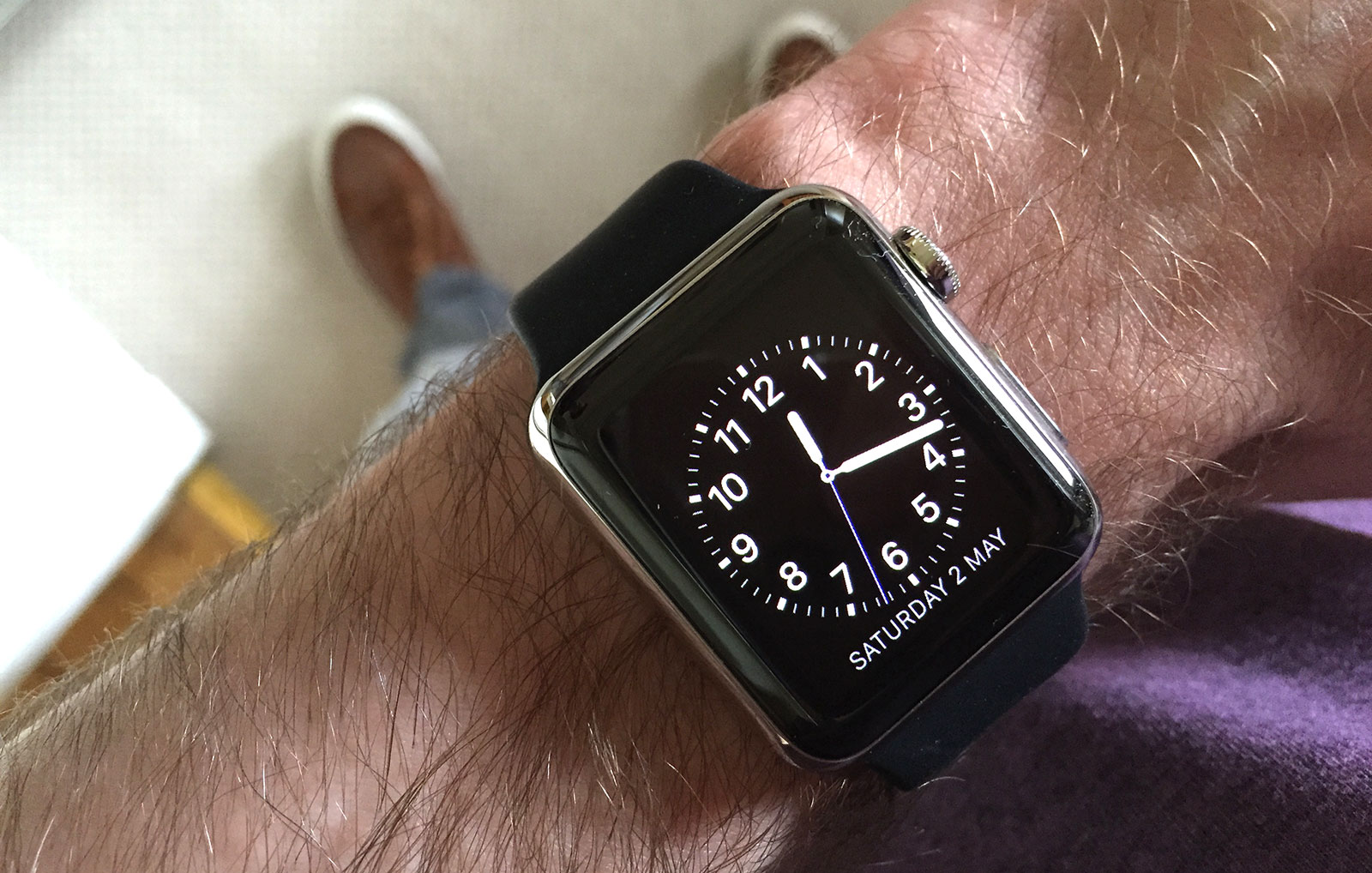 Here’s the face I’m using at the moment, which is a customised version of the Utility face: 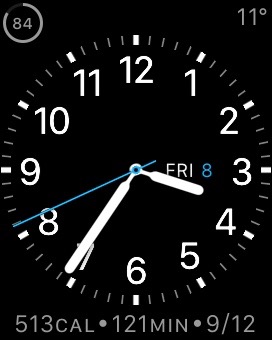 There’s a surprising amount of customisation available, particularly in the non-novelty analogue faces, and the Modular face. You can make it as minimal and elegant, or dense and information-rich, as you like.

One of the few reasons to visit the Home is actually to get back to the watch face. You can double-press the Digital Crown to switch between the two most recently-used apps (including the face), but once in a while you should just use the Crown to zoom into the face. Turn it slowly for a slow-motion transition. It’s different for each face, and it looks amazing.

The Watch has made me leave my iPhone in its dock much more often when I’m at home, or in my pocket when I’m out and about. I’ve trimmed down my notifications via the Apple Watch app on the iPhone, so that only the most essential stuff gets through to the Watch. My brain has already reclassified the iPhone as the big-brother device, for when I’m planning to spend several minutes on a task. Having the Watch as a satellite notifications machine has been very liberating. It’s also cool to do quick image searches, when I’m in need of inspiration or cheering up. 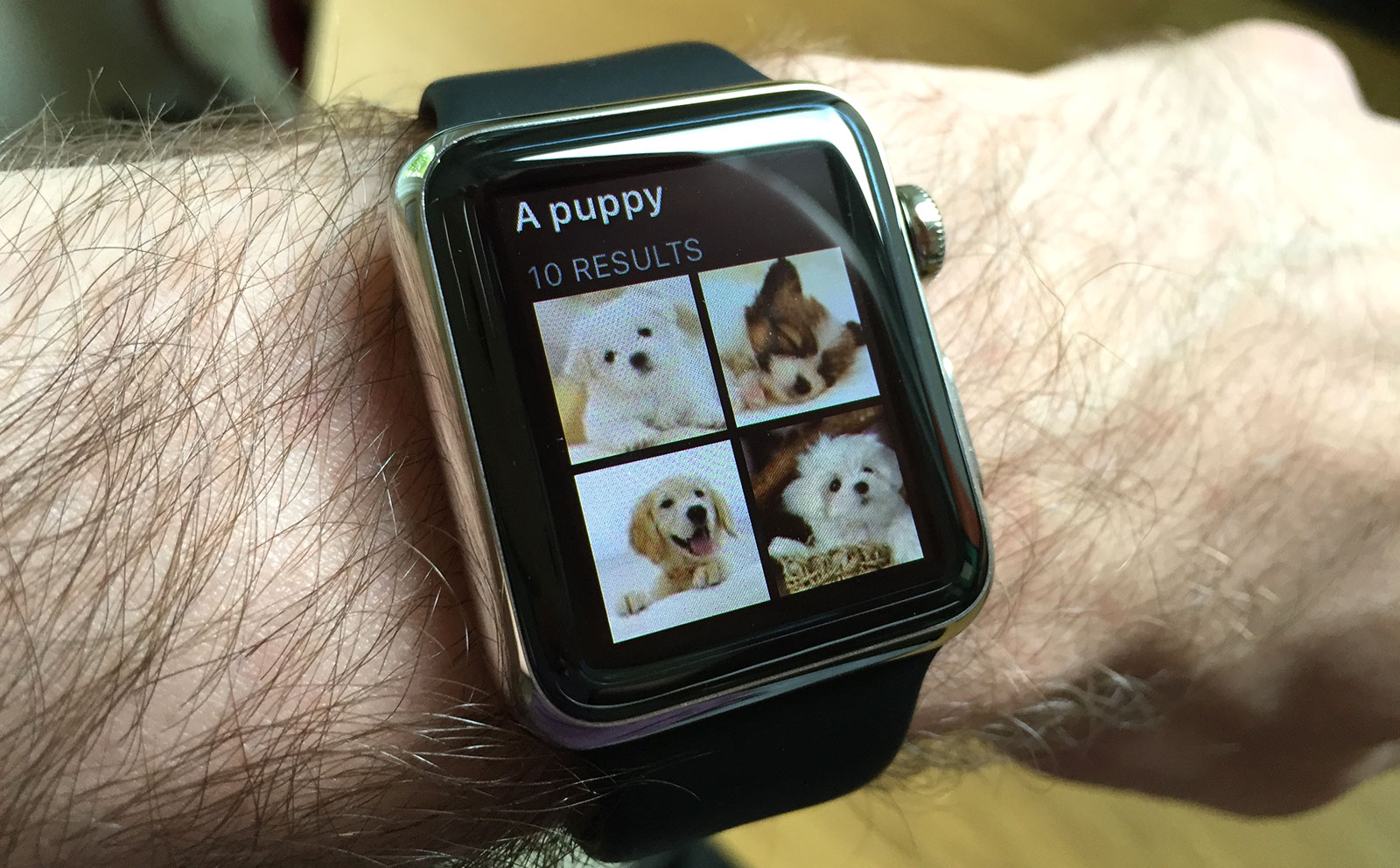 Oh, and Siri is incredibly accurate on the Watch - so much so that I dictate most message replies using it. I think it’s partly that the Watch microphone is angled more towards you than when you’re holding an iPhone, and maybe also something about having the surface of your forearm for sounds to bounce off. That’s just a guess, but the upshot is that it’s surprisingly good.

Finally, they really did their homework on the wrist motion sensor: it’s sometimes creepy how well it predicts when you want to look at the time, and thus illuminates the screen. Angle has a lot to do with it; more so than a change in height. It very rarely fails to automatically light up when I want it to - and you can flip it away from you a little to immediately switch the screen off too.

I have the smaller (38mm) Watch, which also has a smaller battery. You can read about Apple’s battery life tests for that model, and they seem reasonable to me.

My two morning workouts tend to eat about 25% of the battery, then the top-up charge it gets while I’m in the shower brings it back up to full. When I take the Watch off at night, it rarely has less than 50% power remaining. Ten minutes of charging will restore a little under 10% of its power, on average, from my unscientific observations - which is better than Apple claims.

Under average usage (a couple of dozen notifications, the occasional reply to a message, a workout or two, activity tracking, some music control, and regular time-checking), you’ll get a day out of it.

I’ve been surprised at how quickly the Watch has become an all-day companion. The key thing is that it gets out of your way, and doesn’t suck you into lengthy interactions. You get a tap on the wrist, have a quick glance at what’s going on, then you’re back doing whatever you were doing a moment ago.

It’s a new experience for me to find a piece of tech that’s unobtrusive, and generally encourages me to ignore it.

I freely admit that I didn’t get wearables, and wasn’t enthusiastic about the Watch, but it was because I was framing it as another mobile device, like a phone or an iPad. That’s not what it is at all, and the way it quietly settles into your existing life - enhancing it in a handful of meaningful ways, rather than changing it - is a big part of why it already feels so comfortable.

It isn’t a fourth (or fifth, or sixth, or whatever we’re on now) screen, chirping away and making me even more antisocial. It’s more like a respectful butler, attending to needs without fuss, and keeping the worst of the riff-raff out. That sounds simple, but it’s a big deal. We need more stuff like this. More taps, and fewer beeps. Glances, instead of screen-lit faces ignoring the world.

I was too quick to judge this little gadget, but after just a week, my iPhone spends more time in a pocket than in my hand. The Watch, though, is kind of like my wedding ring.

Most of the time, you forget it’s even there. 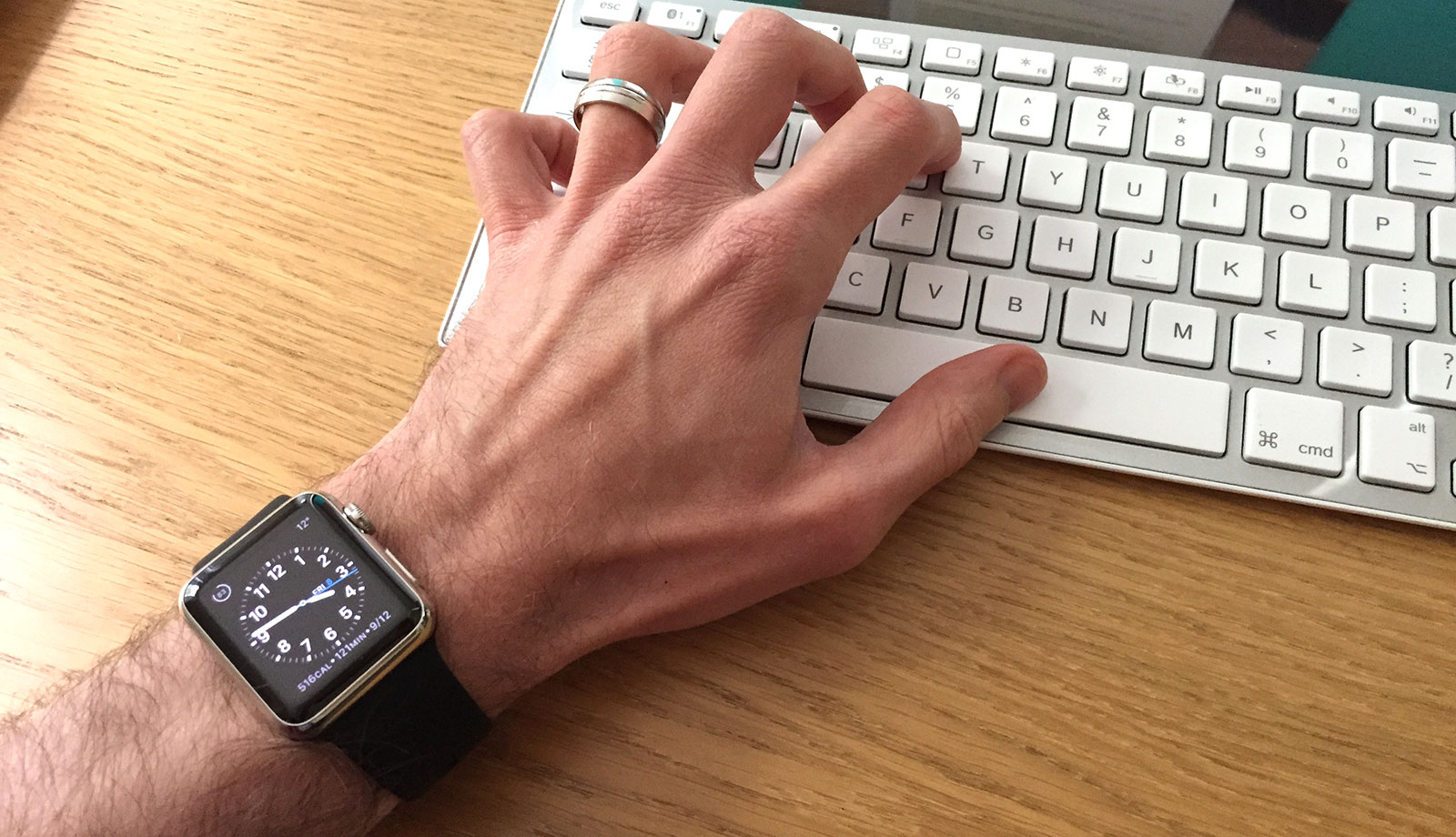