I recently wrote an article about being productive on a small screen, which mentioned my belief that the most effective route to productivity on a computer is learning the available keyboard shortcuts.

In this piece, I’d like to share some of the keyboard shortcuts and related functionality that I use every day on the Mac.

Firstly, as I stated in the previous article, you should take the time to learn your text editing shortcuts. They’ll pay off every day. With that done, let’s get started.

Here’s a quick list of the primary keys involved in keyboard shortcuts on the Mac, for reference. If you’re reading this article on a desktop device, you can also hover your mouse over any keyboard shortcut to see it spelled out.

Navigating the UI using the keyboard

Many people don’t realise that you can access and control much of the user interface without using a pointing device. You can find the relevant settings in the Shortcuts tab of the Keyboard panel in System Preferences. Make sure that Keyboard is selected in the list on the left side. 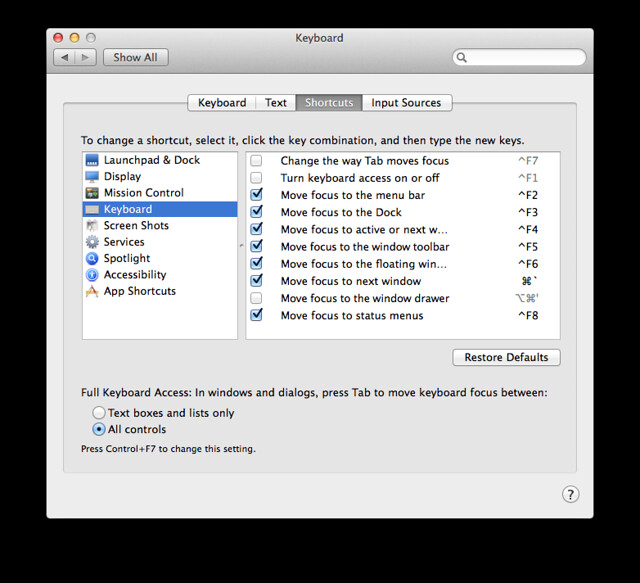 With the commands in that section, you can move the keyboard focus to various parts of the interface. One of my favourites is ⌃F2 to move focus to the menubar. Depending on the function keys setting in the Keyboard tab of the Keyboard panel, you might need to add Fn to any shortcut involving one of the function keys.

You can also switch between apps with ⌘⇥, and you can switch between the windows of an app with ⌘` (that’s the backtick key, which also has the ~ character on it). In both cases, you can add ⇧ to cycle through apps or windows in the opposite direction.

Finally, make sure you’ve enabled Full Keyboard Access in the Keyboard panel. When active, you can use the ⇥ key to move between most controls on the screen, not just text boxes and lists.

Mac apps tend to have lots of menu commands, and it can be difficult to remember where they all are. Instead, you can just type to search (and then trigger) a menu command, by pressing ⌘? (on English keyboards, that’s usually the same as ⌘⇧/). 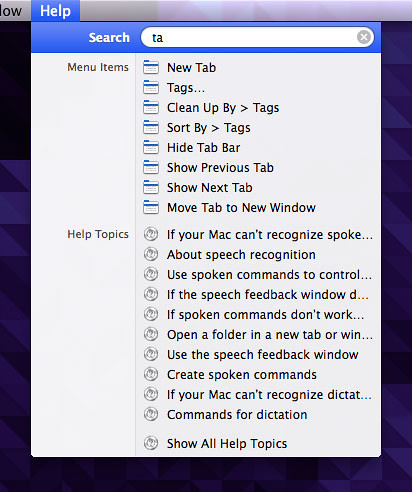 Spotlight lets you quickly find and open any apps, files, emails and so forth on your Mac. You trigger it with ⌘Space.

You can also use ⌘↑ and ⌘↓ to jump between the sections (categories) in the list of results. 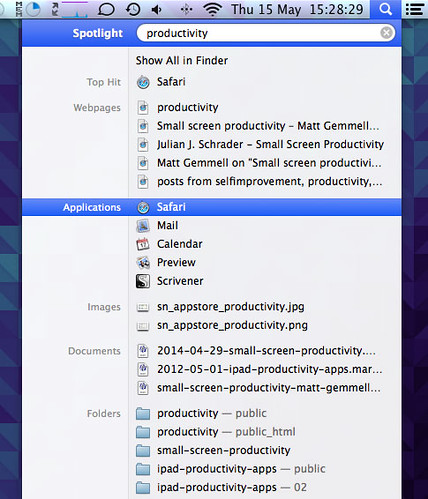 Finally, if you hold ⌘ when activating a result, it will be revealed in the Finder instead of being opened.

Apps have their own keyboard shortcuts (mostly defined in their menubars), but you can change many of them to suit your own needs. To do so, again use the Shortcuts tab in the Keyboard panel, but this time select App Shortcuts in the list on the left side. 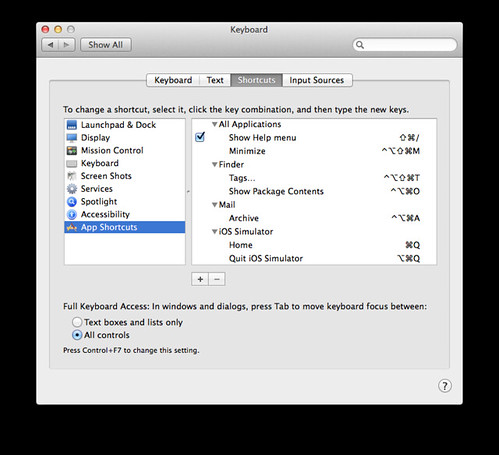 Create a category for the app whose shortcuts you want to override, then make an entry for each relevant menu command. Make sure you type the name of the menu command exactly as it appears in the app, including case-sensitivity and punctuation. In particular, note that an ellipsis (…) after a command name is a single character, not three periods. You can type an ellipsis with ⌥;.

One of the things I do most often on the computer is opening recently-used files. Most apps keep track of their recent files in the Open Recent submenu of the File menu, but you can also get at them via the keyboard.

You’ll see a display of all the app’s open documents, with a horizontal Cover Flow browser of recent files along the bottom. 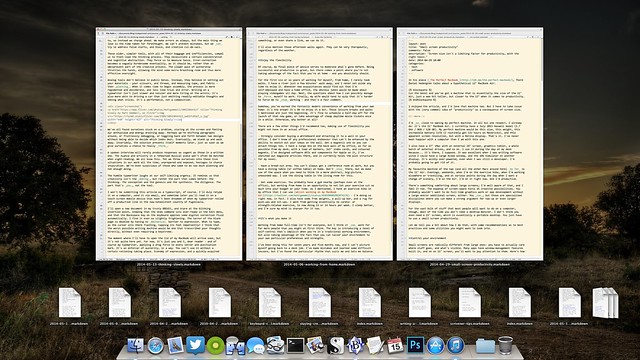 Working with Save sheets

Saving (or closing) an unsaved document invokes the familiar Save sheet, which can mostly be controlled via the keyboard. 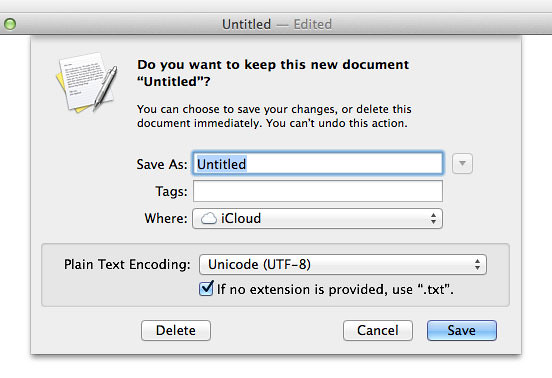 Working with mailboxes in Mail

If you’re a Mail user (as in Apple’s own email app on OS X), you can easily add your favourite mailboxes to Mail’s toolbar, which gives you the considerable benefit of being able to open those mailboxes using keyboard shortcuts. You can also move selected messages to those mailboxes using another set of shortcuts.

Don’t forget that you can customise Mail’s existing keyboard shortcuts as mentioned previously.

Certain apps let you add global hotkeys to trigger them regardless of which app is frontmost at the time (though the app you’re triggering usually has to already be running at the time). For example, the official Twitter app on the Mac lets you choose global shortcuts to make a new tweet, and to toggle the app’s visibility. 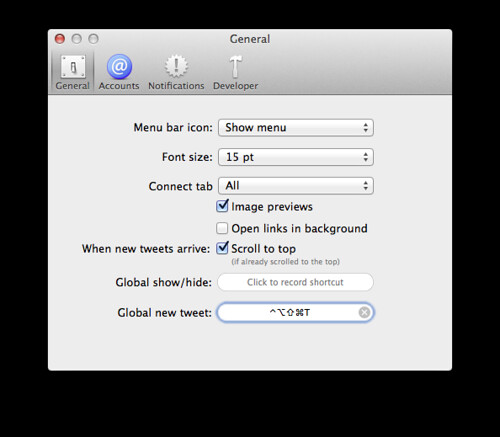 Check each app’s own Preferences window to see if there are any shortcuts you can customise, and be sure to choose ones that won’t conflict with something else. Use as many modifier keys as possible to lessen the chance of any conflicts.

Whilst you’re typing, you can quickly look up the selected (or nearest) word in the system’s dictionary. The keyboard shortcut to do this is customisable (in the Shortcuts tab of the Keyboard panel again, this time in the Services section). On my Mac, it’s ⌘⌃D. 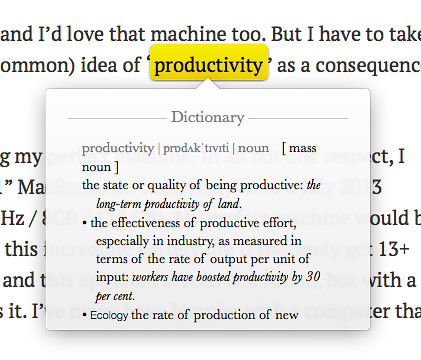 The definition will be shown in a pop-over window. You can choose which dictionaries are used by opening the Dictionary app, and visiting its Preferences window.

Autocompletion can be helpful, and sometimes it can be the bane of your existence. You can tip the balance by adding your own useful text substitutions. It’s once again in the Keyboard panel, but this time in the Text tab. 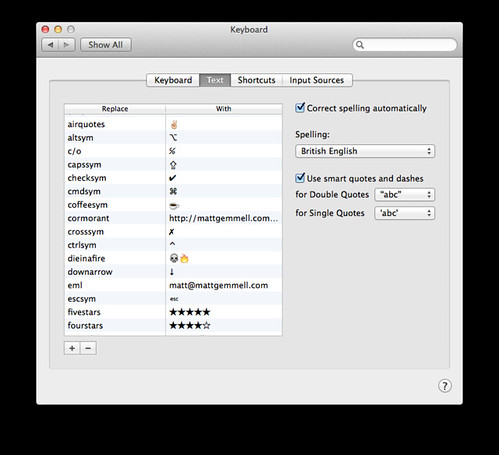 That’s also where you can disable spelling correction, if you want to.

There are many special characters and emoticons that you can type on OS X in almost any text field, usually via the Special Characters… menu command (often in the Edit menu). You can also trigger the palette with ⌘⌃Space. 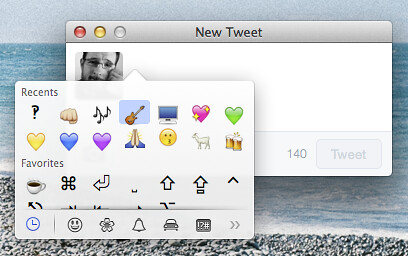 You don’t need to use the pointer at all when working with these characters. You can:

You can also tear the palette off and leave it floating around if you want to quickly click to insert multiple characters.

I often find it very helpful to temporarily enlarge sections of the screen, and OS X has a built-in function to do so. It’s in the Accessibility panel in System Preferences, in the Zoom section. 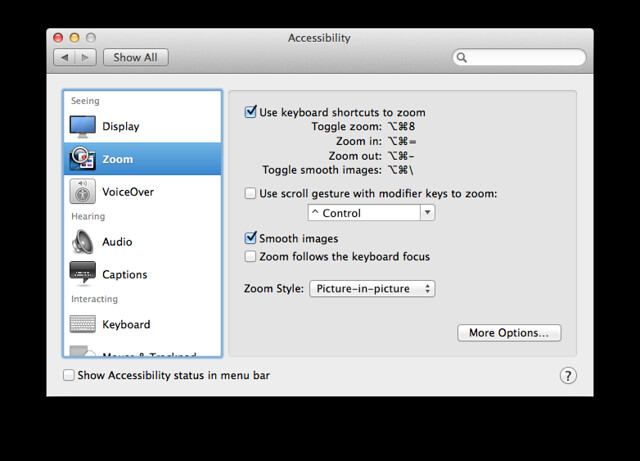 The most useful shortcuts here are:

You can control many aspects of how zoom works (whether it’s smoothed or jaggy, whether the whole screen zooms or uses picture-in-picture, and how zoom follows the mouse pointer) using the More Options… button.

OS X itself can get you pretty far with keyboard control, but your productivity will take another leap with some well-chosen third party utilities. There are hundreds out there that focus on controlling your Mac using the keyboard, but I’ll just share three of the ones I use. Also see my aforementioned small screen productivity article for a few more.

Firstly, I use Alfred as my app launcher and file-finder, instead of Spotlight. It does about three thousand things, but one of the most useful features for me is that I can find, select, and act upon multiple files at once - without ever touching the mouse.

Alfred lets you quickly add the selected search-result to a “buffer” by pressing ⌥↑, and you can then type another query to find another file, add it to the buffer, and so on. 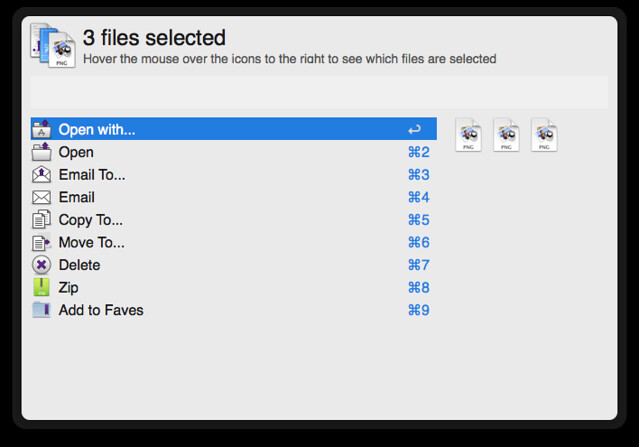 This barely scratches the surface of what Alfred can do. I can hardly use a Mac without it anymore.

Next, a utility I was only made aware of a short time ago, and I immediately bought a license: Shortcat. It’s basically Spotlight but for all visible controls and objects on the screen: it’s type-to-select for everything you can see.

Essentially, you type ⌘⇧Space, type a query, and Shortcat highlights elements on screen with quick-access keys. You can then use those keys to move the pointer to the relevant object, and click it by pressing ↩. It’s wildly, ridiculously fantastic. You should be using it.

Finally, the ultimate in keyboard control (and automation) is of course a macro utility. Automator is sort of similar, but my chosen app for this is Keyboard Maestro. If you’ve ever used QuicKeys or similar utilities, you’ll know what to expect. It’s incredibly deep and versatile, and you can extensively automate your workflow with it.

I’d recommend each of these utilities to you without hesitation.

Keep your hands where they belong

Controlling your Mac via the keyboard isn’t just faster and more satisfying, it can also remove a lot of pain from your life. Physical pain from contorting your wrists to use trackpads and mice, and tension headaches from nudging a pointer towards tiny targets all day long.

It takes time to learn what’s possible, and to re-train yourself to use the keyboard instead of reaching for the mouse, but the payoff in speed and efficiency is more than worth it.

Keep your eyes on the screen and your fingers on the keys, and you’ll be done in no time.