I’ve always been interested in how other people set up their working area. I used to run my own business as a software developer, and my desk was a complete mess for most of that time; it was piled high with stuff, and the desk itself was huge. It had a cramped, unsettling feeling, but I had a lot of things I needed to keep within reach (or thought I did). My office decor was neutral in tone, but very visually busy, with knick-knacks and posters and all sorts of other things dotted around.

I gave all that up more than three years ago to focus on writing, and I’ve never been happier. I recently got around to revamping my home office, and I took the opportunity to pare things down considerably. I’d like to share my current setup with you. 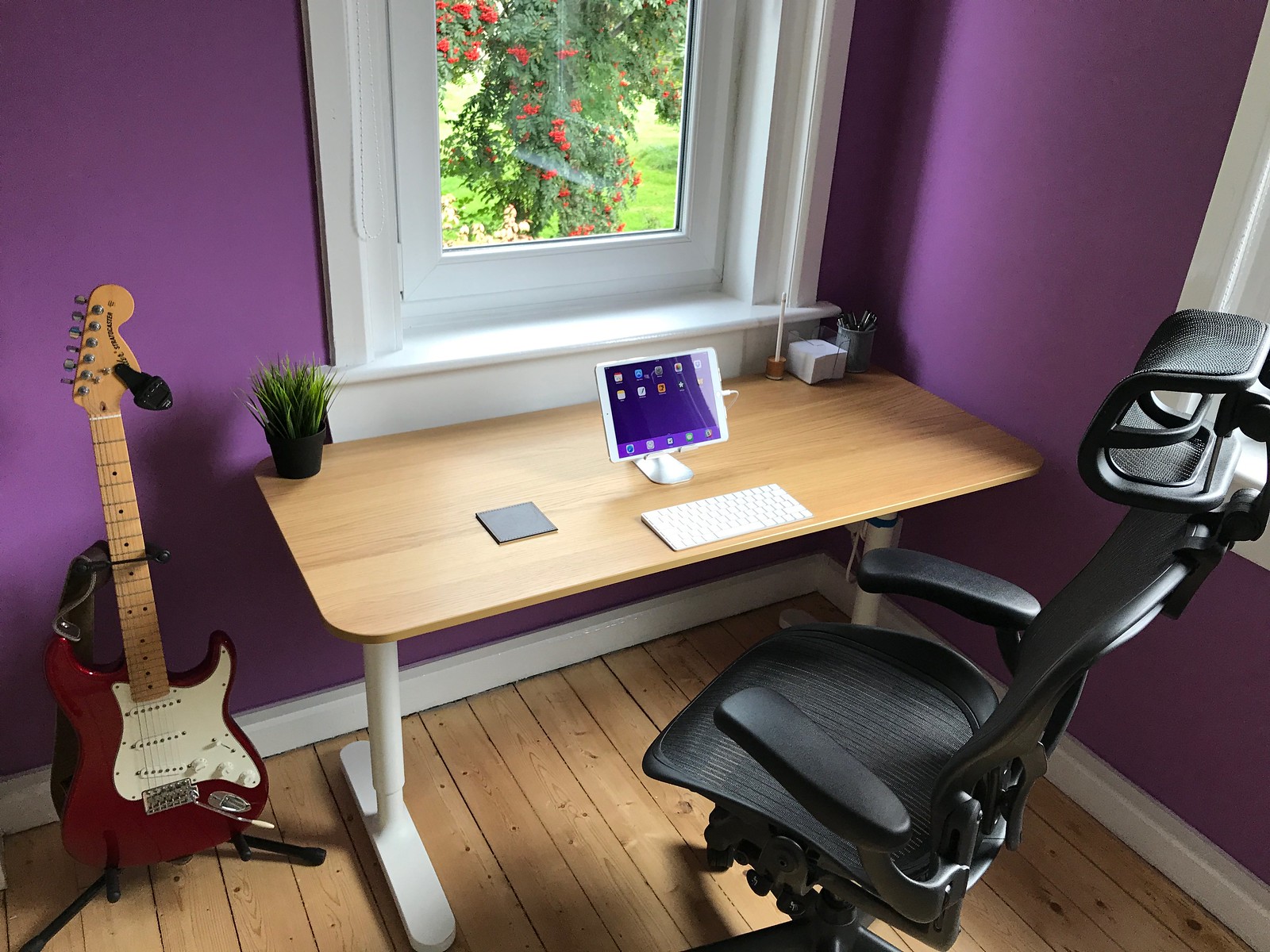 This is the working corner of my office, decorated in a gorgeous violet shade. The rest of the room is a very slightly blue-ish grey, and is mostly empty except for a printer/storage nook in the far corner, and my workout area with my indoor bike and other equipment. There are no adornments on any of the walls.

Ninety percent of the floor area is vacant, giving plenty of room for the puppy to lie down wherever he chooses while I write. We’re also fortunate to live right beside a park, and my office windows look out onto trees, a grassy hill, a river running along the bottom, and always some dogs chasing around.

The desk itself is an IKEA Bekant (140 x 60cm), in oak veneer with white legs. It’s about 40% of the size of my old desk, and it’s the only work surface in the room. It has very few items on it, and I love the sense of compactness but also breathable space. The most essential object is my computer, which is a 2017 10.5” iPad Pro, sitting on a Lamicall adjustable stand. It’s my full-time machine, and yes, I absolutely do write books on it — using Ulysses. I type with an Apple Magic Keyboard at all times; it comes along with me wherever I go, usually in a Canopy.

There’s a brown leather coaster near the iPad, for my coffee cup or such, and at the top-left corner of the desk there’s a (fake) IKEA plant, just to pull the outside scenery into the office a little. At the top-right corner, there’s a block of notepaper and a pot of 0.3mm Staedtler pigment liners, my favourite writing implement — though in truth I almost never use pen and paper during the average week, and should probably put those items in a drawer for occasional use. There’s also the Apple Pencil for my iPad Pro, in a Samdi holder that can also charge the Pencil. My chair is an Aeron. I bought the Aeron with the proceeds from Writing in Markdown.

Beside the desk on the left, you’ll see my one non-work device: a candy apple red Fender American Special Stratocaster, with maple neck. The guitar is a thinking tool for me, and I tend to pick it up when I’m puzzling out a scene or a plot point — or I’ll take the puppy for a walk in the park instead.

My workout area has my exercise bike (a trusty old York c101, not made anymore, but I recommend the brand), and various other pieces of equipment I use. At the moment, there’s a Powerbar 2 for pull-ups (it hooks onto the door frame when needed; now entering its fifth year of trouble-free use), some York free weights, push-up grips, and braces for my elbows. I have other stuff that I rotate into use periodically, stored in the basement which is below the office. 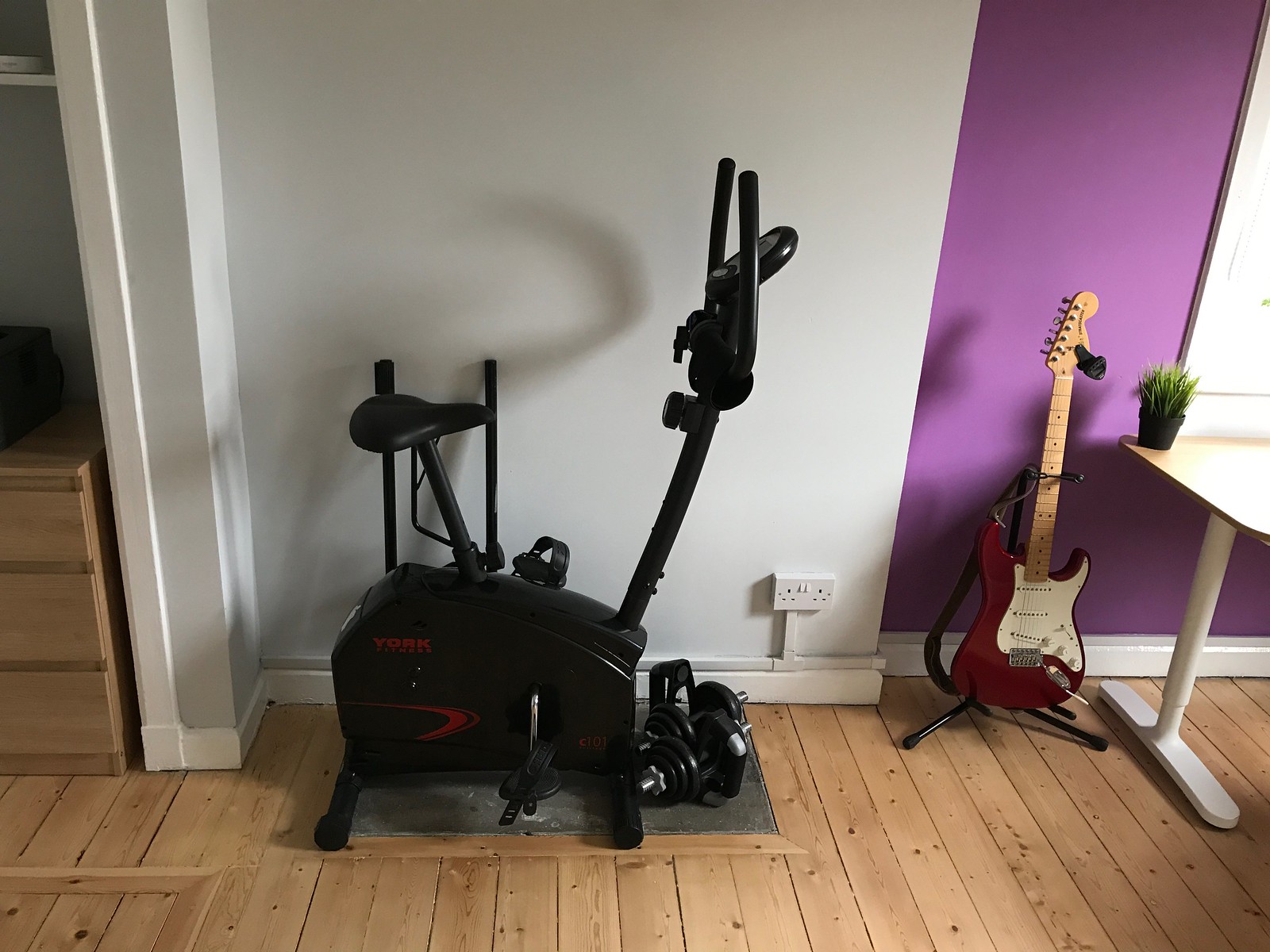 The printer nook has an IKEA three-drawer Malm unit, which I’ve wired for power internally (I can charge various devices while they’re in the drawers), and it holds some office and organisational supplies, various power adapters, cables and computer accessories, and business documents. There’s a Creative Soundblaster ROAR Bluetooth speaker above, a bookshelf of select volumes, and an Amazon Echo Dot I’m playing with. I added a motion-sensor light above the bookshelf section, which lets me find things in the drawers at any time without switching on the room’s main light. The printer itself is a Brother HL-L2340DW mono laser, as recommended by The Wirecutter. 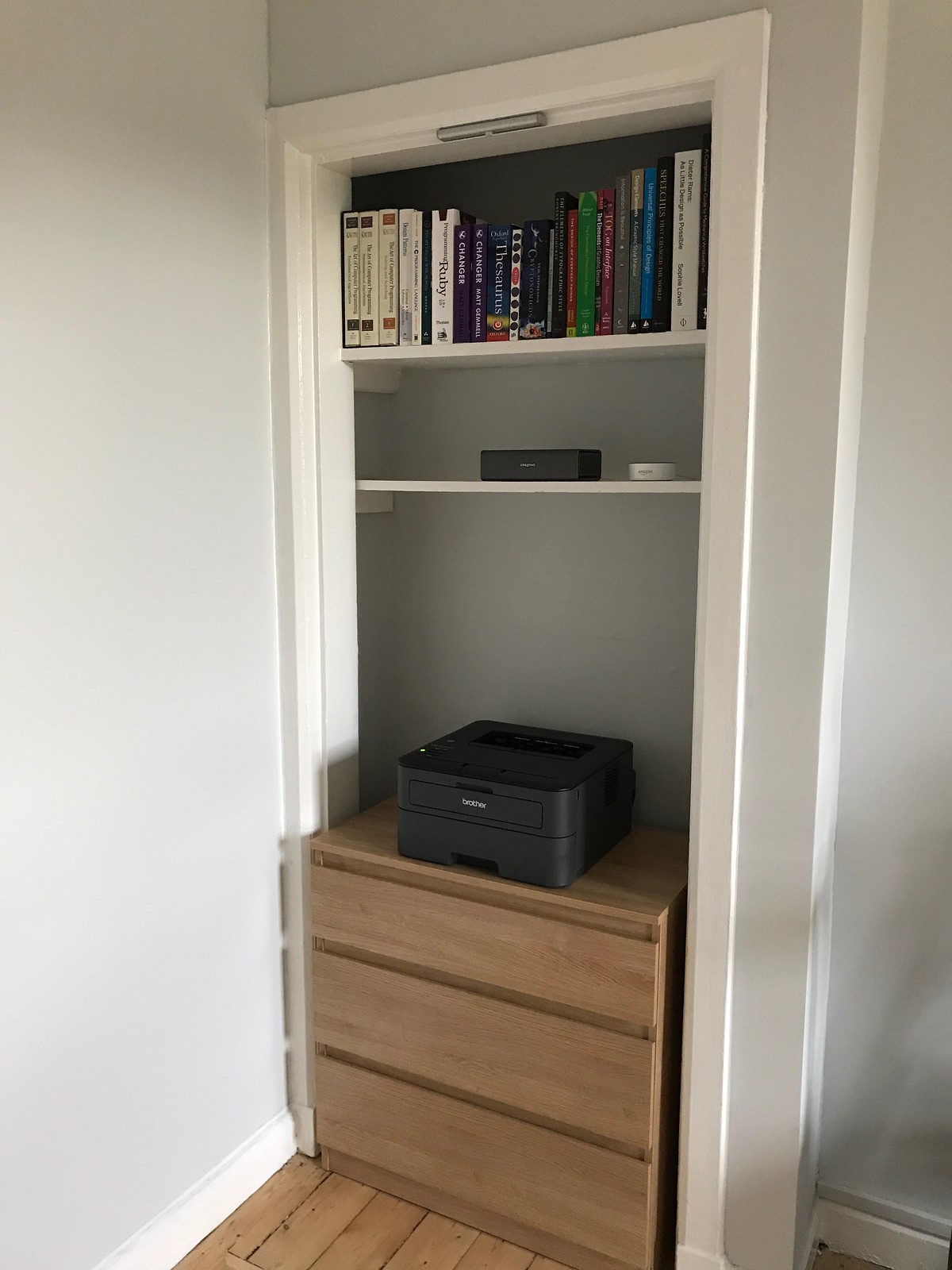 And now you’ve pretty much had the full tour. I spend 90% of my time typing in Ulysses, but I also take the iPad Pro out of its stand to use the Pencil for planning and problem-solving in GoodNotes too. You can read more about how I use that app over at the company’s blog.

I’m in this room, sitting at this desk, for more than forty-five hours per week, and I’m delighted with its new focused, minimalist style. It may not be your favourite workspace, but it’s definitely mine. If you’d like to share a photo of your own workspace, I’d love to see it on Twitter. Thanks for reading.