Since beginning this series of articles, I’ve often been asked on Twitter what exactly my iPad setup is. Here’s an overview of what I use, and how I work.

Without further ado, here’s a photo of my entire office rig. 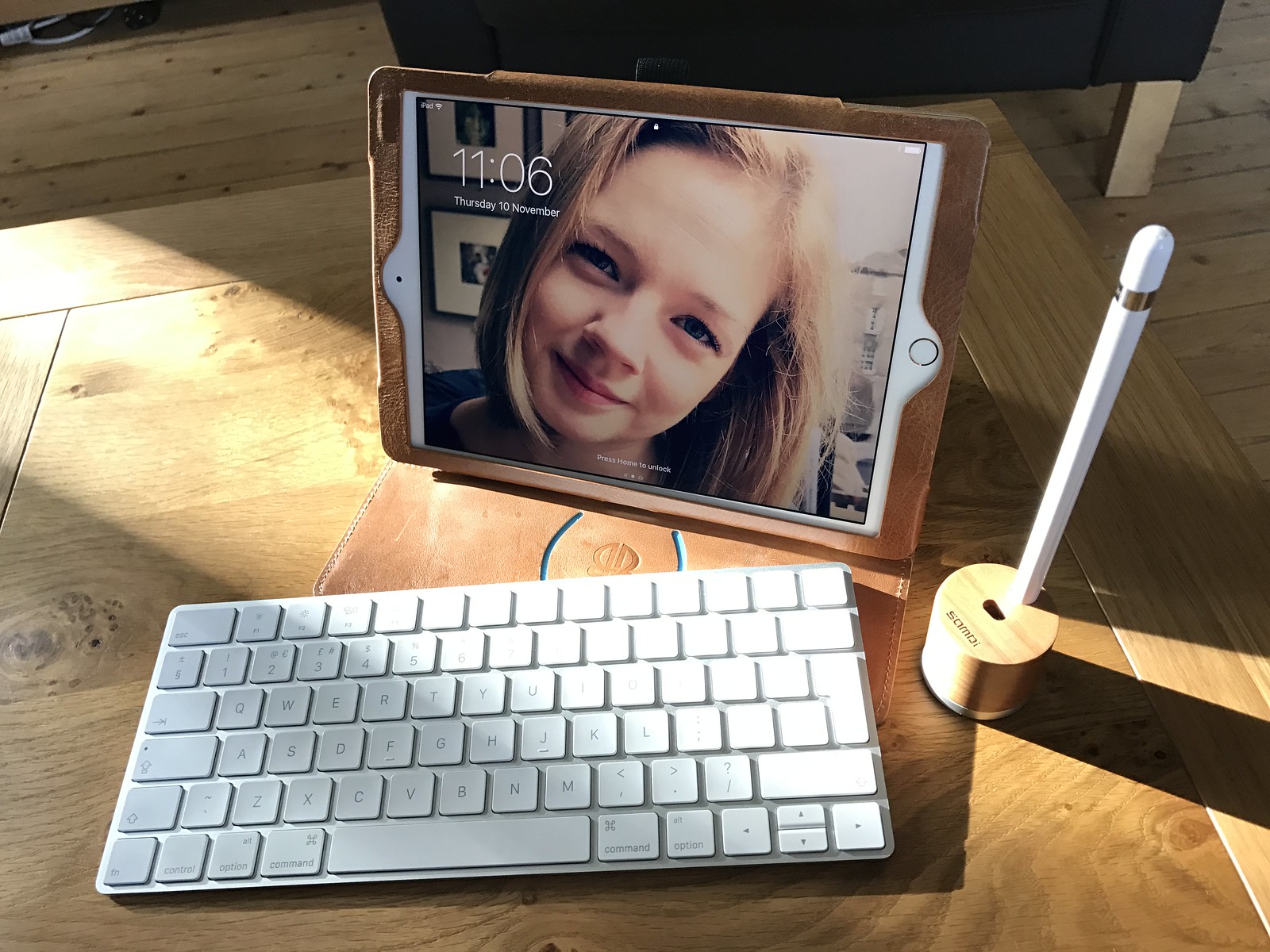 (I don’t actually work hunched over a coffee table, of course, but it made for a prettier picture. I’m 37 years old, and I’m well aware of ergonomics, thank you very much. You may also want to compare and contrast it with my office rig of three years ago.)

I have a gold iPad Pro 9.7” (128GB, wi-fi). I also have an Apple Pencil, and I use an Apple Magic Keyboard with the iPad. The 128GB model is more than enough for my needs — I’m a writer, and all my active work takes up barely a tenth of my Dropbox storage. I also don’t need cellular connectivity because I have an iPhone with tethering and a very generous data plan.

Regarding size: I much prefer the 9.7” iPad to the 12.9” version; I find the larger one just too big for me. People with different preferences and needs will choose the 12.9” instead, I’m sure, but I prioritise a sense of radical portability. The 9.7” is at a great midway point between a small magazine (in portrait orientation) and a really small laptop (in landscape). Given how focused and touch-centric iOS is, with sparse UI and direct interaction, I’ve yet to miss a larger screen — especially as it’s been a few years since I extensively used anything larger than a 12” MacBook or an 11” MacBook Air. The 9.7” iPad is the right size for me. I’ve heard rumours of a 10.x” model in 2017, and I’ll watch any developments in that area with interest.

Regarding getting the iPad Pro instead of the iPad Air 2, which has identical dimensions and weight albeit with more modest tech specs: I was very much attracted to the Pencil as an input device for graphics work (more about that in a future article), scribbling, possibly finding a way to make autographed ebooks, and — admittedly — as a toy. The improved True Tone display, the four speakers, and the iPhone 6s-level front and back cameras were also enticing. I’d budgeted for it, so that’s what I went with. If those aspects aren’t important to you, you can certainly save quite a bit by going for the Air series of iPad instead.

Regarding the external keyboard: I also very much like the ability to push the iPad further away from me than a fixed keyboard-case would allow, hence the Bluetooth keyboard. The Magic Keyboard is the finest Apple typing machine of the modern age, in my opinion, and I love the key action on it. The battery also lasts for weeks, or even months. The one sub-optimal aspect of this arrangement is when I occasionally want to use the iPad for typing while I’m sitting in an armchair; a dedicated keyboard case would provide the underside rigidity to make it a more comfortable experience. I either prop the iPad nearby and keep the keyboard on my lap, or use the on-screen keyboard. As I said, it’s for a small percentage of my time.

I’ve tried the Smart Keyboard, and while I like its key-travel and the cleverness of the design, I find it a bit too small for my hands (and the UK layout has an absurdly small left Shift key). I also don’t like how the underside of the keyboard — which will be resting on arbitrary surfaces — is the part that goes flush to the screen when the cover is folded up. I am interested, though, in the Logitech Create keyboard case for the iPad Pro, but I haven’t got beyond adding it to my Amazon wishlist. It’s something I plan to try out in future.

My current non-keyboard case is a third-party brown leather cover, with a slot for the Pencil, magnetic wake/lock, and the ability to prop the iPad up at a couple of different angles. My wife got me a cute wooden stand for the Pencil too, which you can run a Lightning charge cable through if you want.

When it’s all folded up to put in my bag, it’s a very compact arrangement indeed. I leave the stand for the Pencil at home. 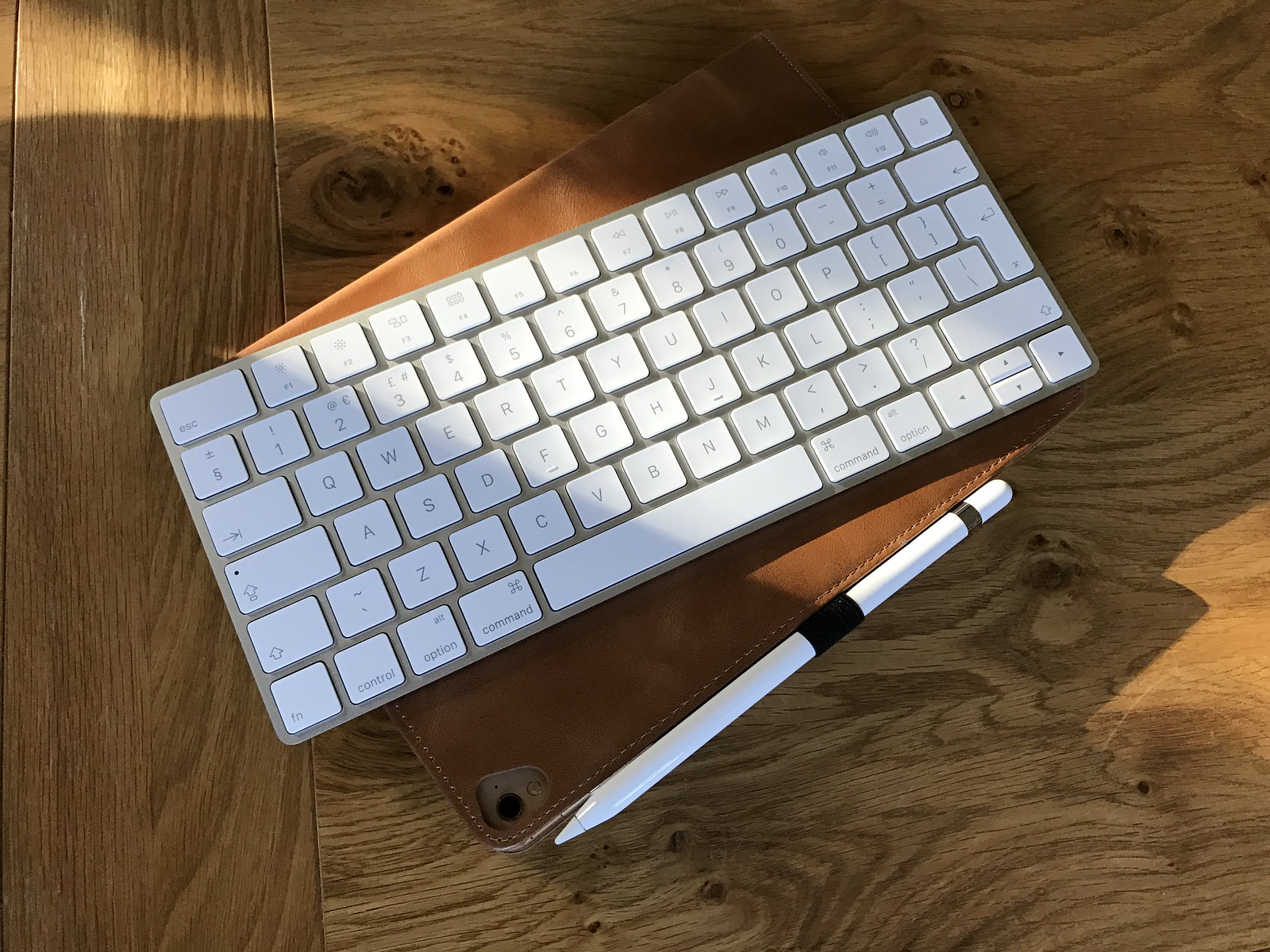 You can read the other articles in this series to hear about some of the apps I use for various tasks, but I keep my primary Home screen pared-back. A few essential productivity, communication, and social media tools, and plenty of space. Here’s how it looks at the moment. 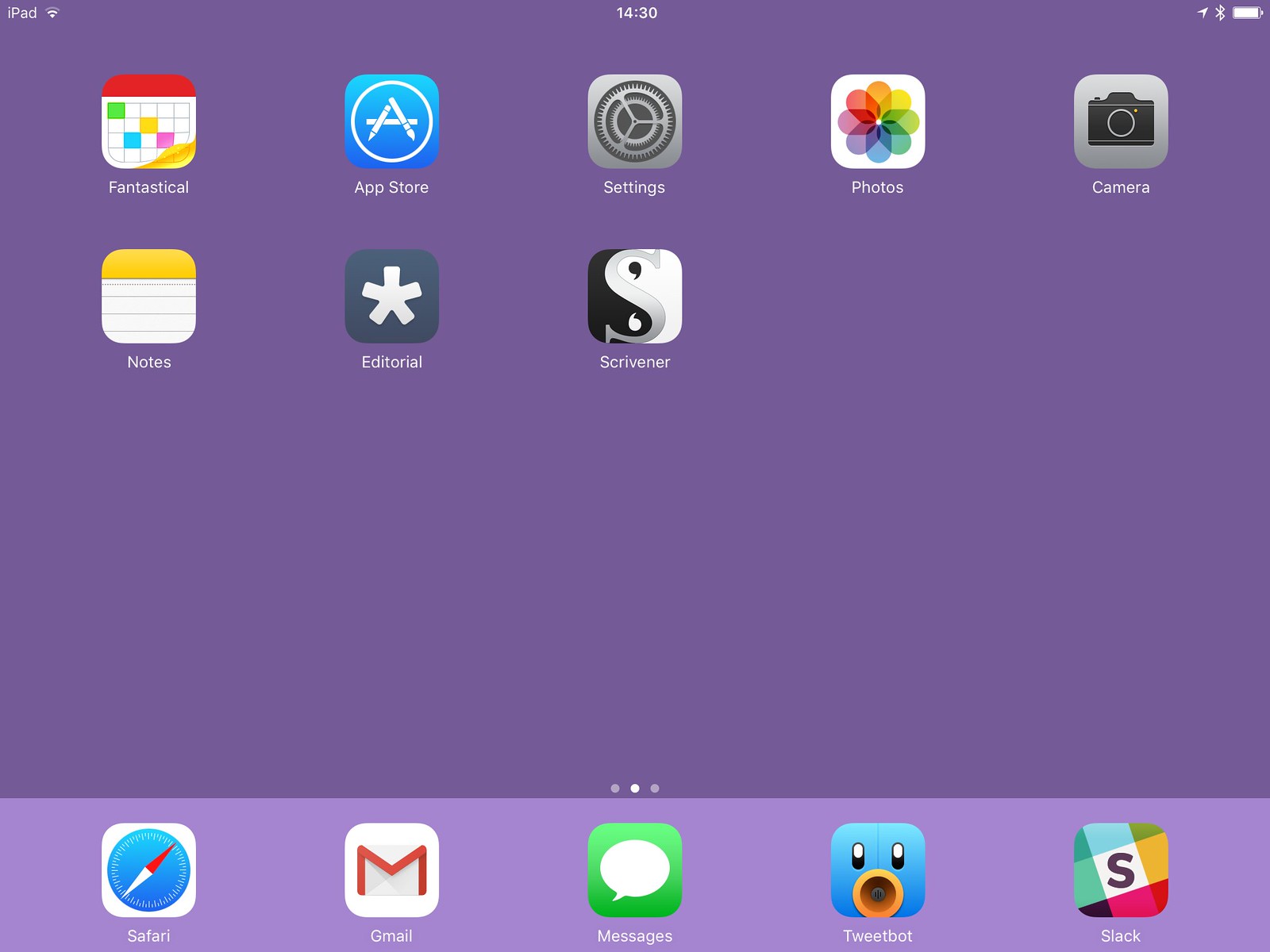 My iPad (and MacBook) wallpaper is just a solid shade of purple, my favourite colour. If you want it, you can download it as an image.

I do most of my work from a coffee shop, or on the odd occasion that I work from home, I have a dedicated office here. In the coffee shop, I use the iPad propped up in the case as shown previously, and don’t have a problem with it. As I said, I do keep it pushed back a bit from the keyboard. When I’m at home, I have a clever Lavolta stand, previously used with my MacBook, that elevates the whole iPad (in its case) to eye-level, and also lets me tilt it forward so the screen is nigh-vertical. I also have an Aeron chair, and a Kensington foot rest which — critically — has a lockable tilt control. It’s very comfortable.

The whole iPad plus Pencil plus keyboard setup is lighter than my 12” MacBook, less expensive, and feels like it’s several different machines in one. It’s extremely portable and flexible, and dear reader, I’m really loving it. I’m always on the lookout for new and better stands and cases, and I’m certain to mention those on social media as and when I acquire them. You should follow me on Twitter to stay up to date.

That’ll do for now. Thanks for reading, and I’ll see you again next time.