I had good intentions. I know that’s what everyone says, but it’s true.

Seven years ago, when I set up my home office in our new place — I’ve worked from home full-time for more than a decade now, by the way — I took a photo of my then-unsullied desk. Here it is. 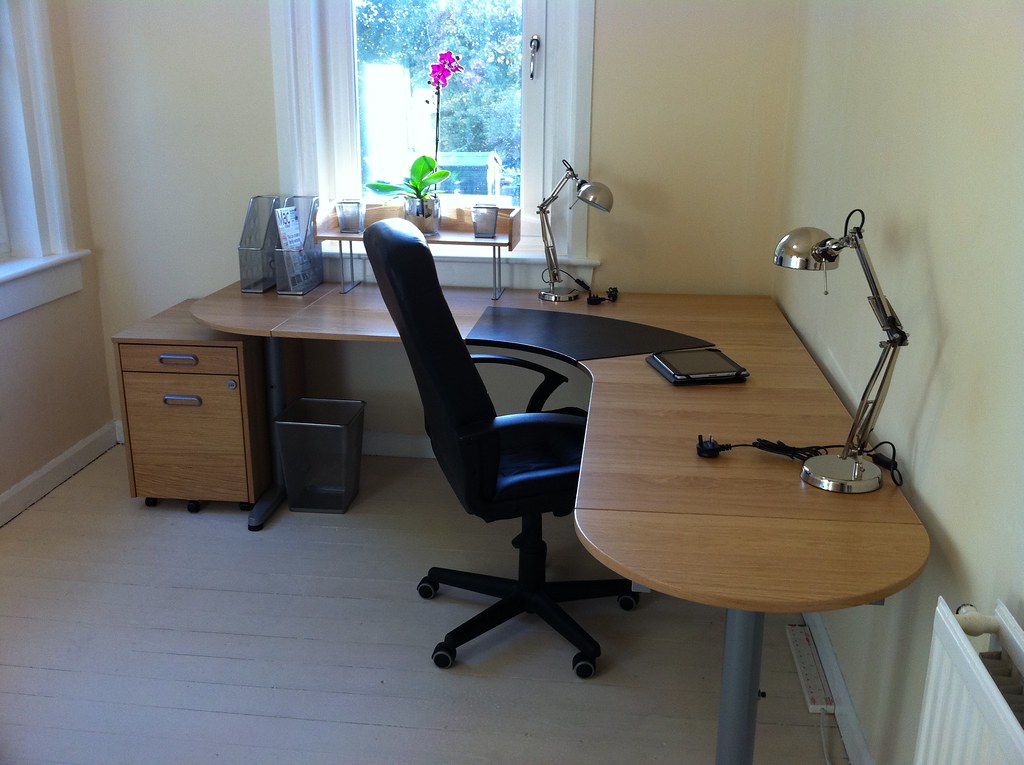 It was an IKEA Galant, configured as a big, L-shaped monster of a thing. I was a consultant iOS and Mac software engineer, and I need a lot of tech gear. Big iMac, keyboard, pointing device, external drives, additional display, test devices, and so on. The clutter grew and grew. 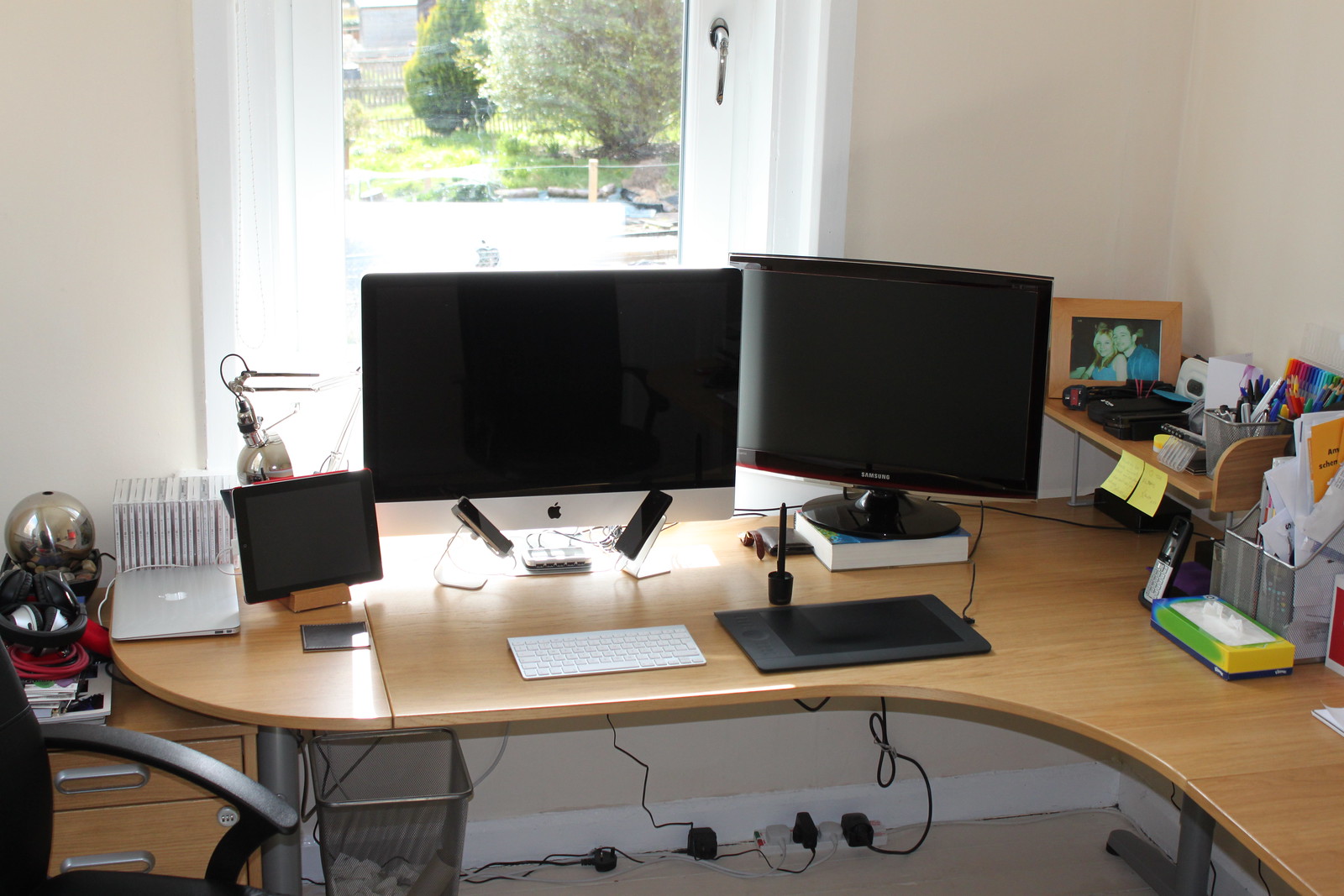 Latterly, by the middle of last year, I’d long since switched careers (I’m a writer now), and downsized my computing setup too: I was using just a 12” MacBook or 11” MacBook Air, and I sat at the short leg of the desk, having carved out a small, calm space within so much redundant stuff. I’d try not to notice the rest of it, but of course I always did. It took half an hour to properly dust the whole room. I wasn’t happy with it at all. 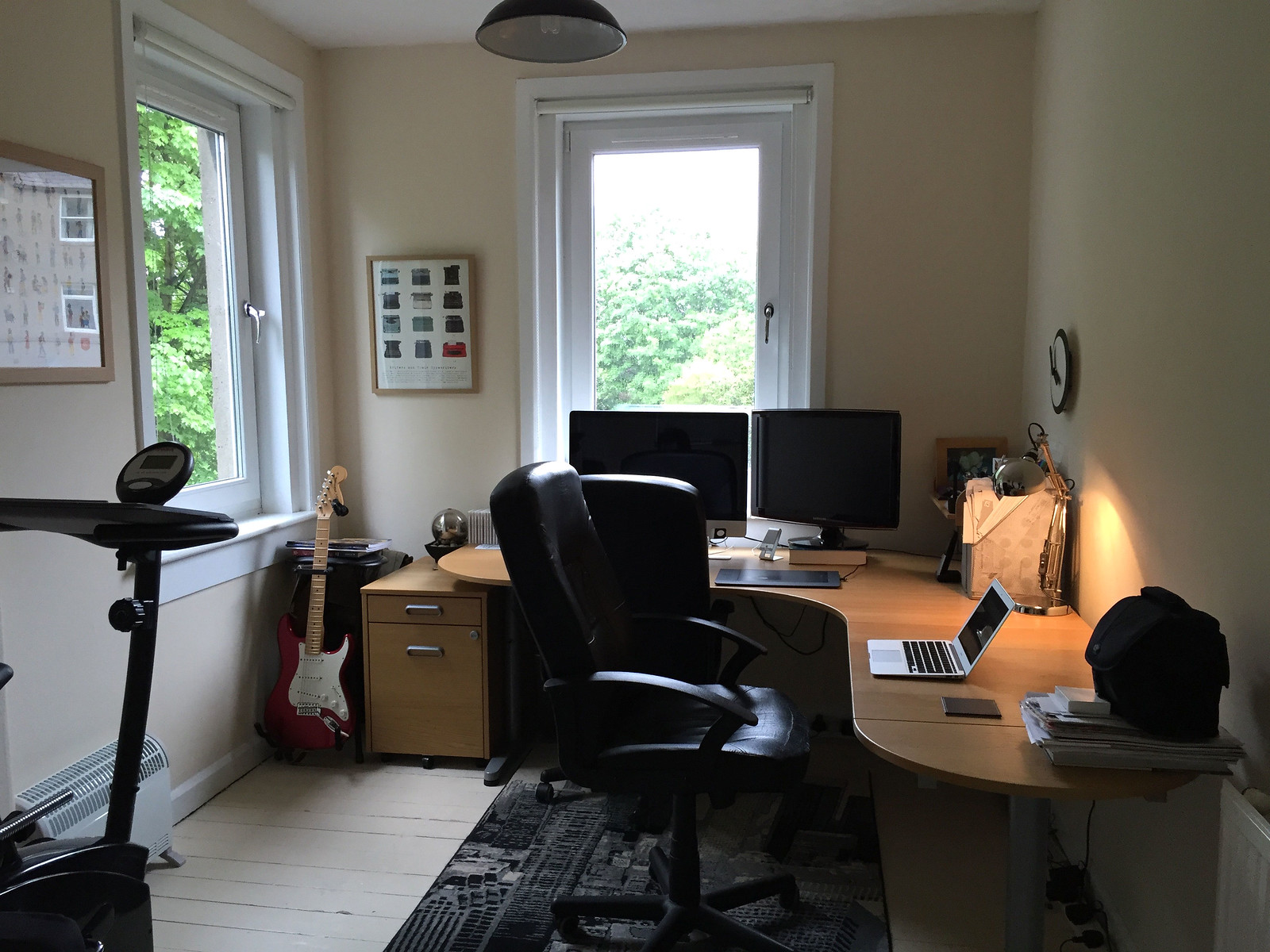 When my little sister had to move here to Edinburgh for a few months for work, we naturally invited her to stay with us, and I jumped at the chance to finally clear out the office and turn it into a bedroom for her. After dropping my wife off at the airport very early one morning, I spent the whole day transforming the place, bidding a final goodbye to a room that had ceased to be a place of focus for me.

Time moved on and little sis moved out, and this year my wife gave me the nudge I needed to do something I’d thought about since we bought the place: create the office I wanted, from scratch. The first thing needing attention was the wooden floor, which for reasons unknown the previous owner had painted magnolia. It looked awful, and was always a bone of contention for both of us. It needed professionally stripped and restored, and we decided to just go for it. Next, we’d have additional power sockets installed in several places, to give more flexibility in hiding away cables, and avoiding any extension blocks trailing around the room. Last but not least, the walls and ceiling needed fully stripped, repaired, plaster skimmed, and painted — including rewiring the ugly smoke alarm cabling back into the wall. We decided to go ahead and get all of it done in series, queuing up tradespeople to visit one after another, during a marathon two-week period.

But first, I needed to know how I wanted it to look when it was done. I measured all the relevant surfaces and distances, made a model in Home Design 3D on the iPad, and came up with something radically different from before, to suit my iPad-only setup and my need for a minimalist workspace. Here’s the concept render. 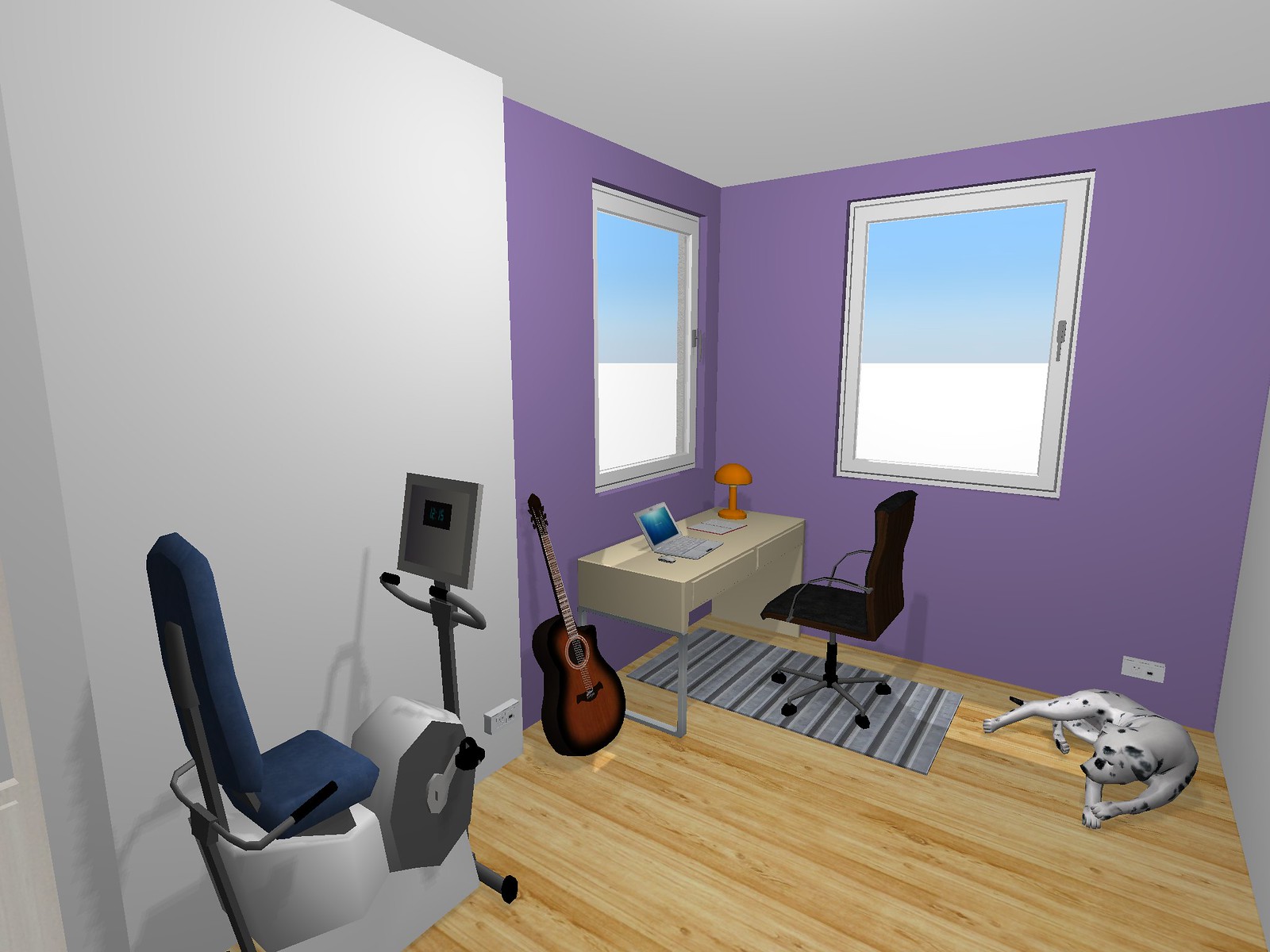 I’m a huge fan of feature walls, with a vivid colour to contrast against more subdued decor for the majority of the room. My favourite colour is purple (it was the highlight colour at our wedding, and I have two books out with covers in that colour), so it was an easy decision to choose it for the feature.

I wanted clean, empty walls as a blank canvas. I can add some judicious art there later, but initially I wanted to keep the place as formless and distraction-free as I could. To that end, the only piece of furniture from the old office making a reappearance, besides my guitar and exercise bike, was my Aeron chair. The old desk was dead and gone, and far too large for my current needs anyway. I needed something smaller, simpler, and able to slot in below the window that looks out into the park. I chose an IKEA Bekant, again in the oak veneer but this time with white legs to match the woodwork, and with that decision made, we cleared the room, and invited the professionals in. 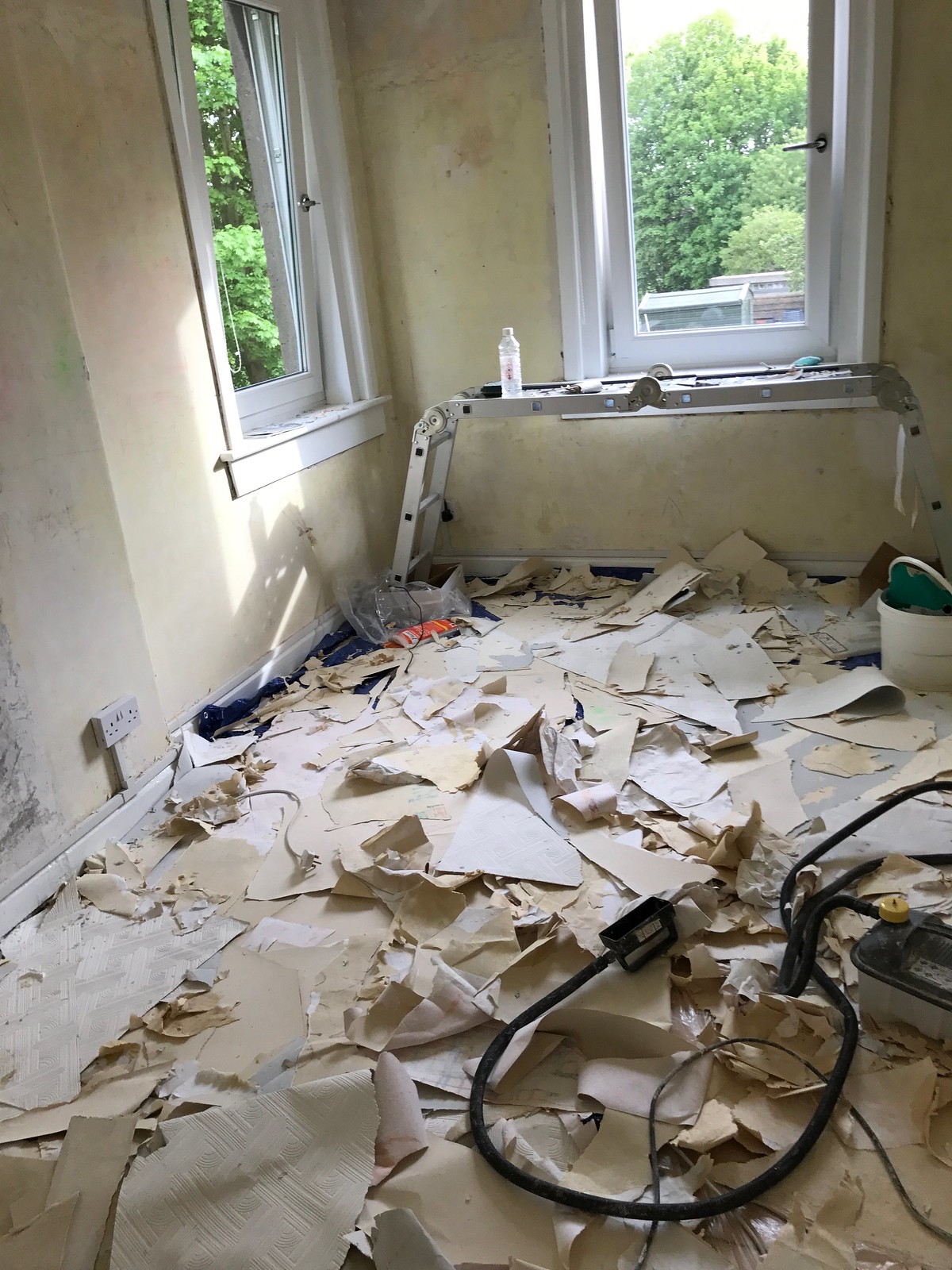 Two weeks later, and having vacuumed, mopped, and wet-dusted more sanded-down plaster dust than I ever care to see again, I had a new office. Here’s how it looks. 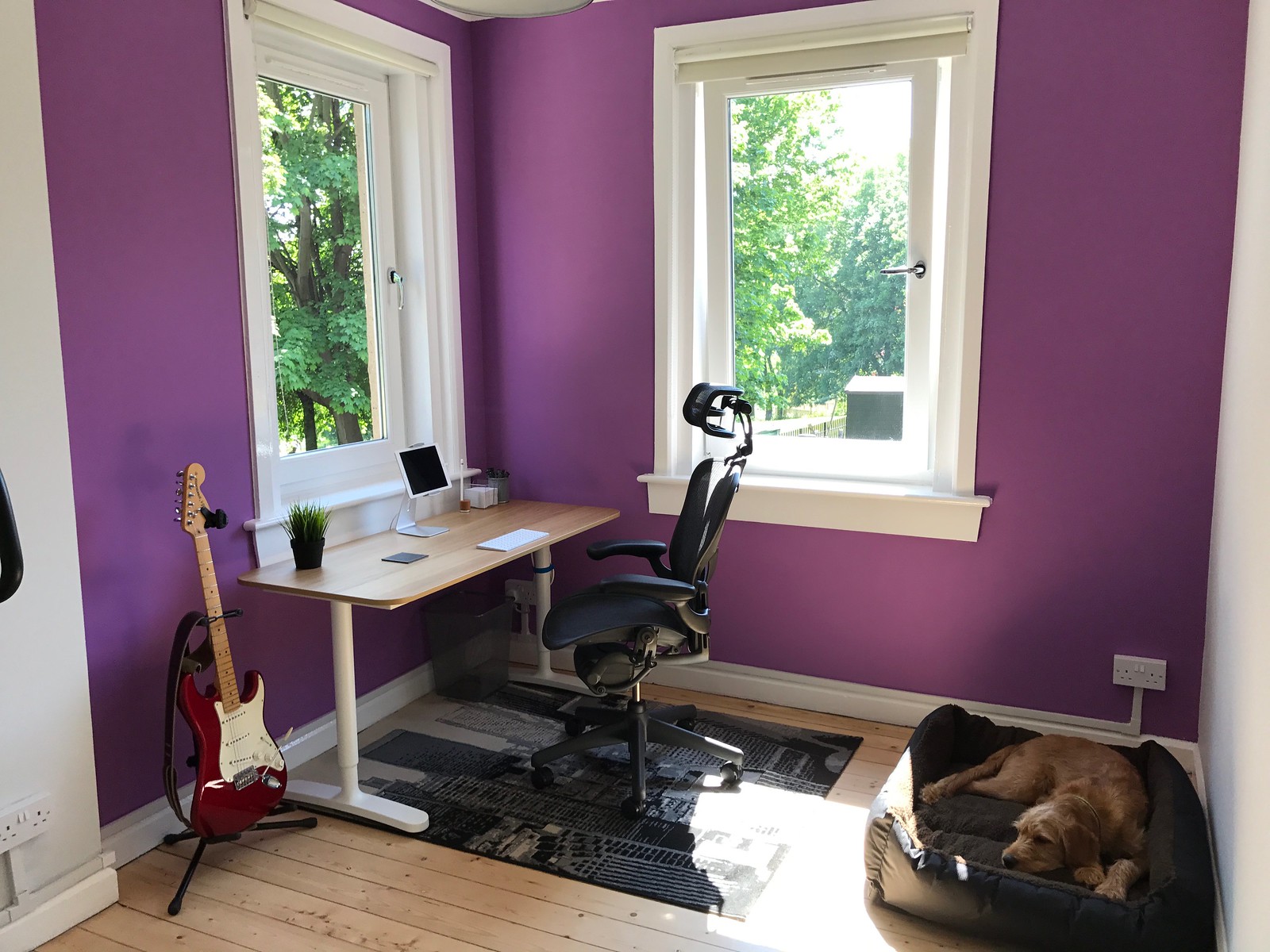 The guitar is a Fender American Special Stratocaster, maple neck, in Candy Apple Red. The puppy is a labradoodle, and his name is Whisky. Here’s a wider-angle view of the room, incorporating my old, reliable York c101 exercise bike. 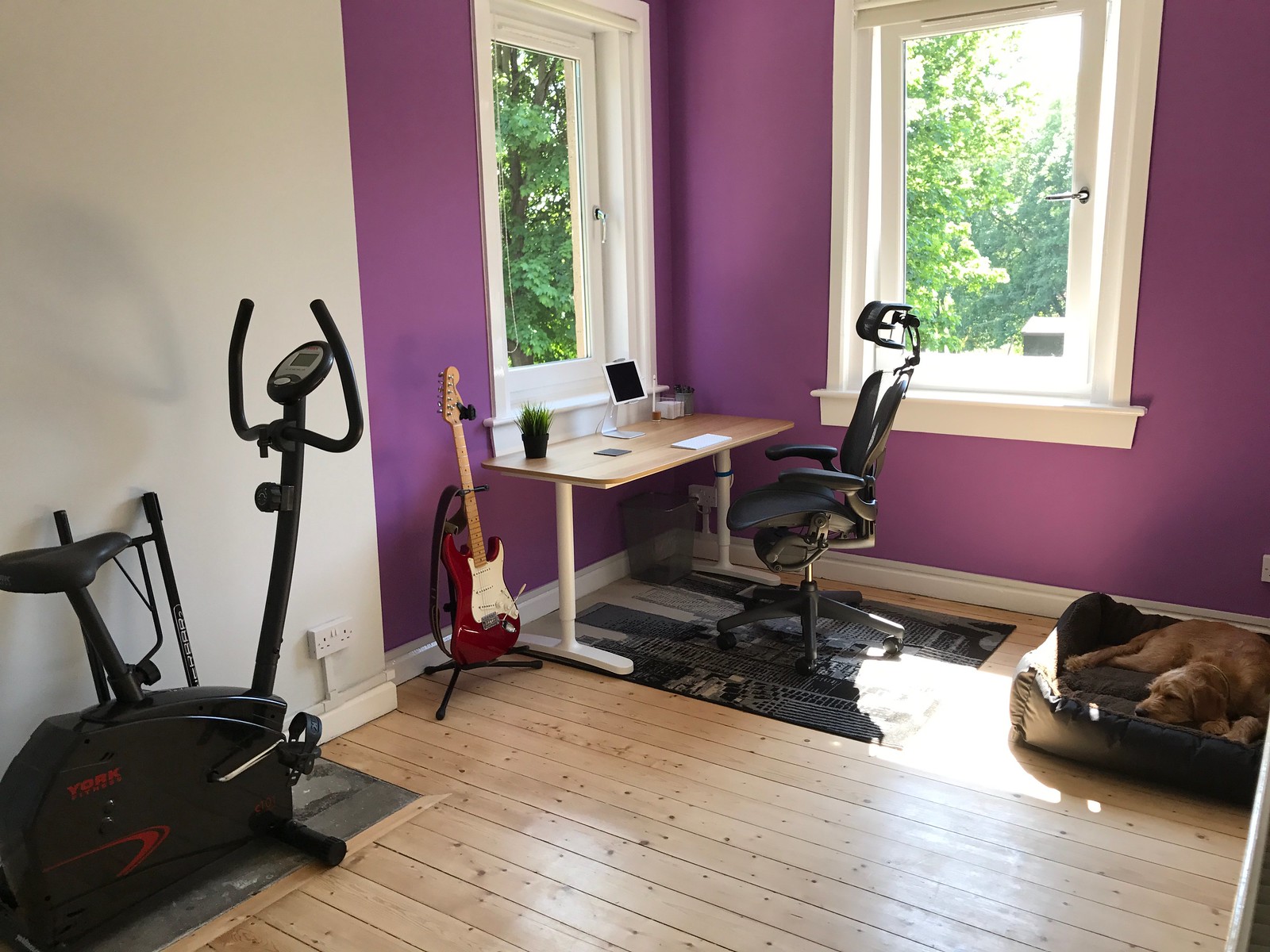 And here’s the desk. It’s the 140x60cm Bekant, lowered to about 70cm in height. The iPad is a 9.7” Pro, and its stand is from AboveTEK. The plant is faux-grass from IKEA. I’m not sure where the coaster is from, but I have three more just like it. The keyboard is an Apple Magic Keyboard, and there’s also an Apple Pencil in a Samdi holder. All the pens in the pot are black Staedtler pigment liners. 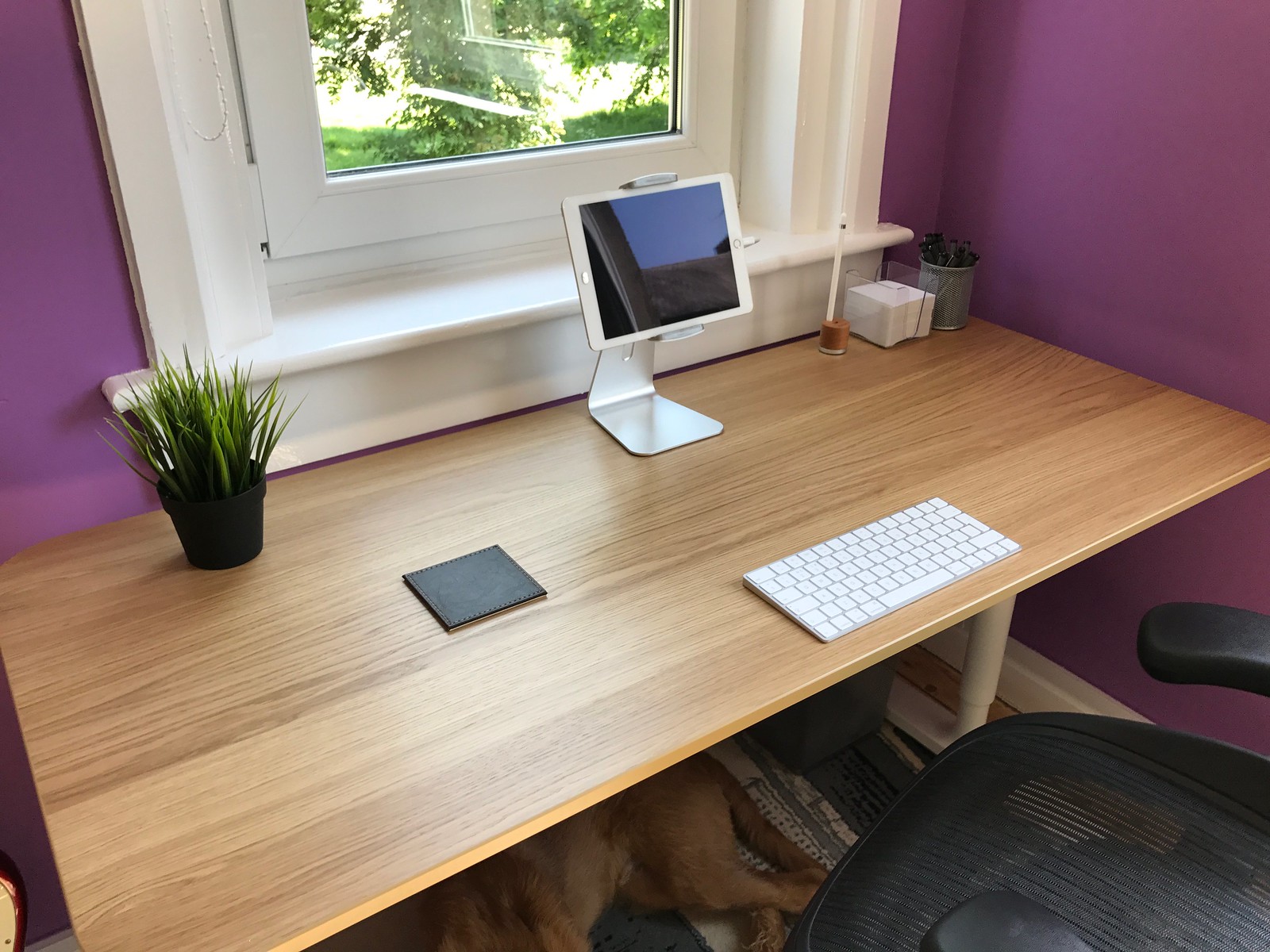 I’m especially happy with how the floor turned out. It adds so much warmth and light to the room, and it’s now an element that I can actively enjoy, instead of trying to forget about it. 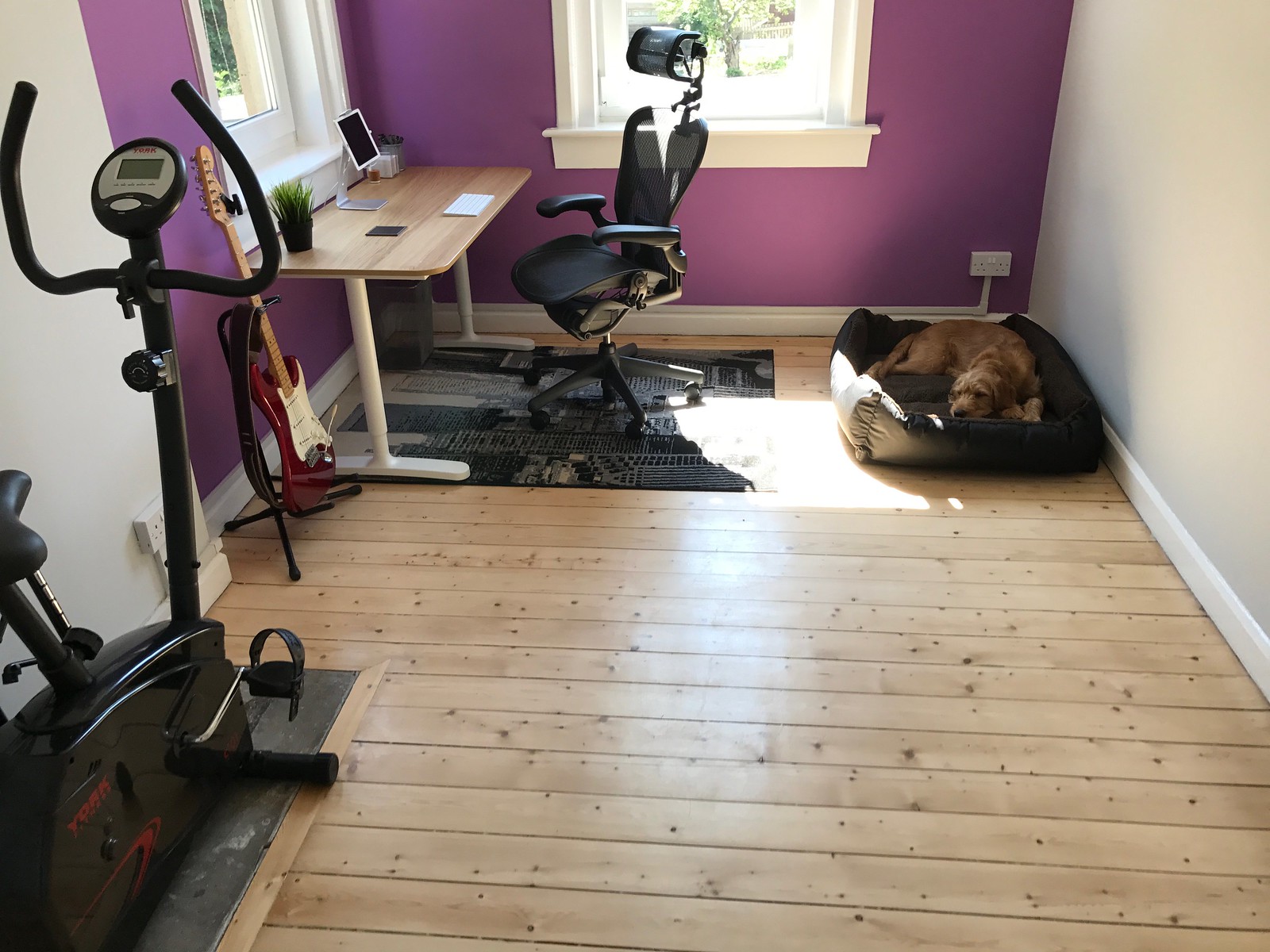 With the exception of the adjoining purple feature-walls where the desk sits, the rest of the walls are a soft grey called turtledove, and all are blank. It has the effect of immediately blurring my visual focus — figuratively speaking — when I look at it, and turning my thoughts inward. That’s exactly what I wanted: a zero-distraction backdrop that pulls me back to what I’m actually thinking about. This is the view towards the door from my chair. The hook on the far wall is for the hatch in the floor, which conceals the stairway down into the basement. 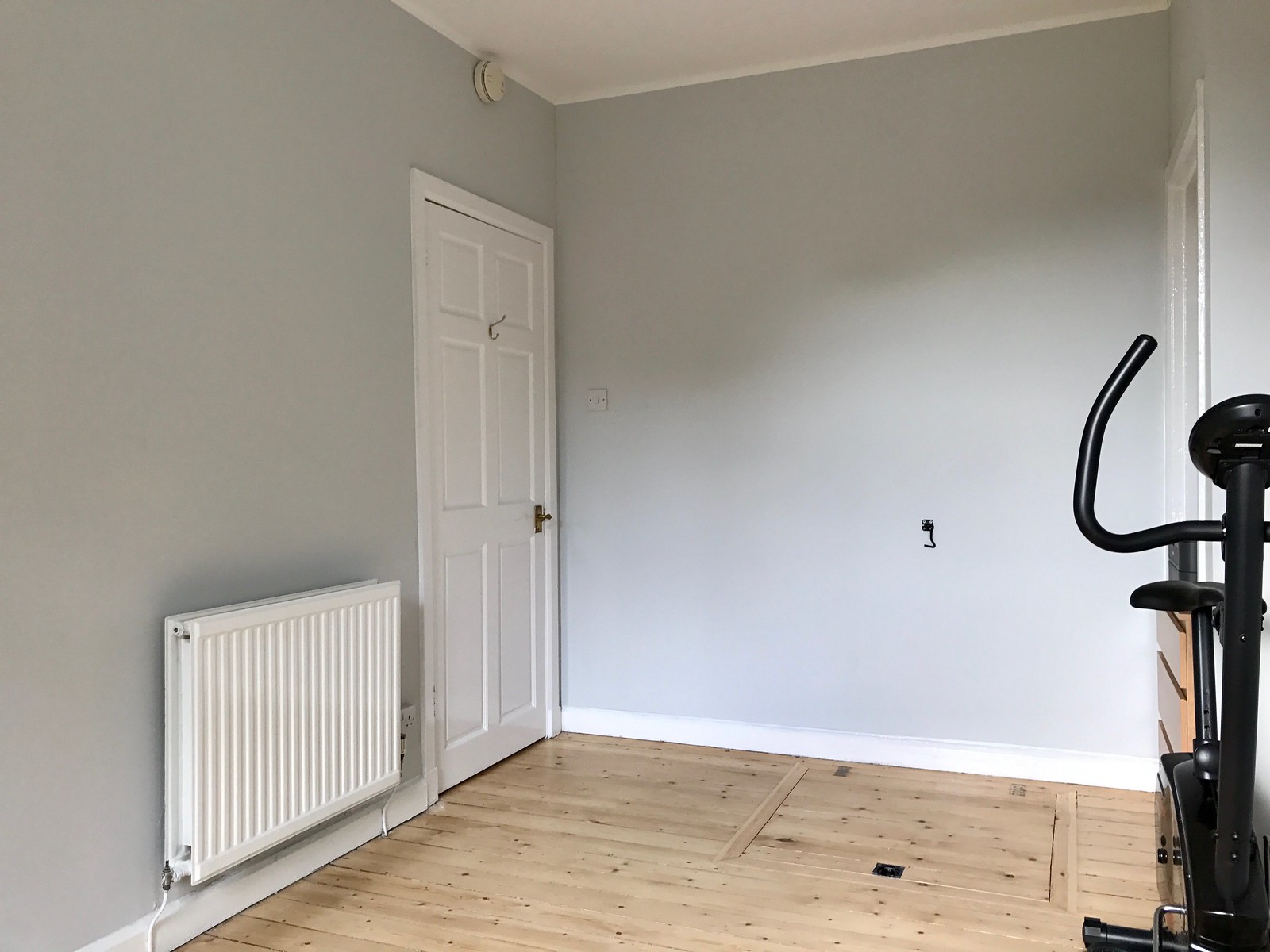 In the old office, I had a printer cabinet which protruded into the room, plus a filing cabinet at one end of the curved desk. In each case, the drawers and shelves were junkyards of chaos, and I had no real idea what was in there. Finding anything was an exercise in irritation, and because it wasn’t organised, I had no motivation to keep it tidy, so I regularly added more miscellaneous stuff and just allowed the annoyance and shame to be compounded. Urgh. It was very important to me to not allow things to get that way again.

The printer nook is opposite the door, and is a recessed, shallow, open-shelved cupboard within a door-frame; a construct called an “Edinburgh Press”, from its historical use as a linen cupboard where tightly-folded and stacked items would be pressed flat by their confinement, thus keeping them relatively wrinkle-free. I was fortunate enough to find an IKEA unit — the Kullen 3-drawer chest — that fit the space nigh-perfectly, comfortably holding the laser printer. I built the unit but left the back open, so I could route cables inside it, and I’d previously had the electrician install a power socket inside the press itself, again to avoid ugly cables running along the edges of the floor. Here’s how it looks now. 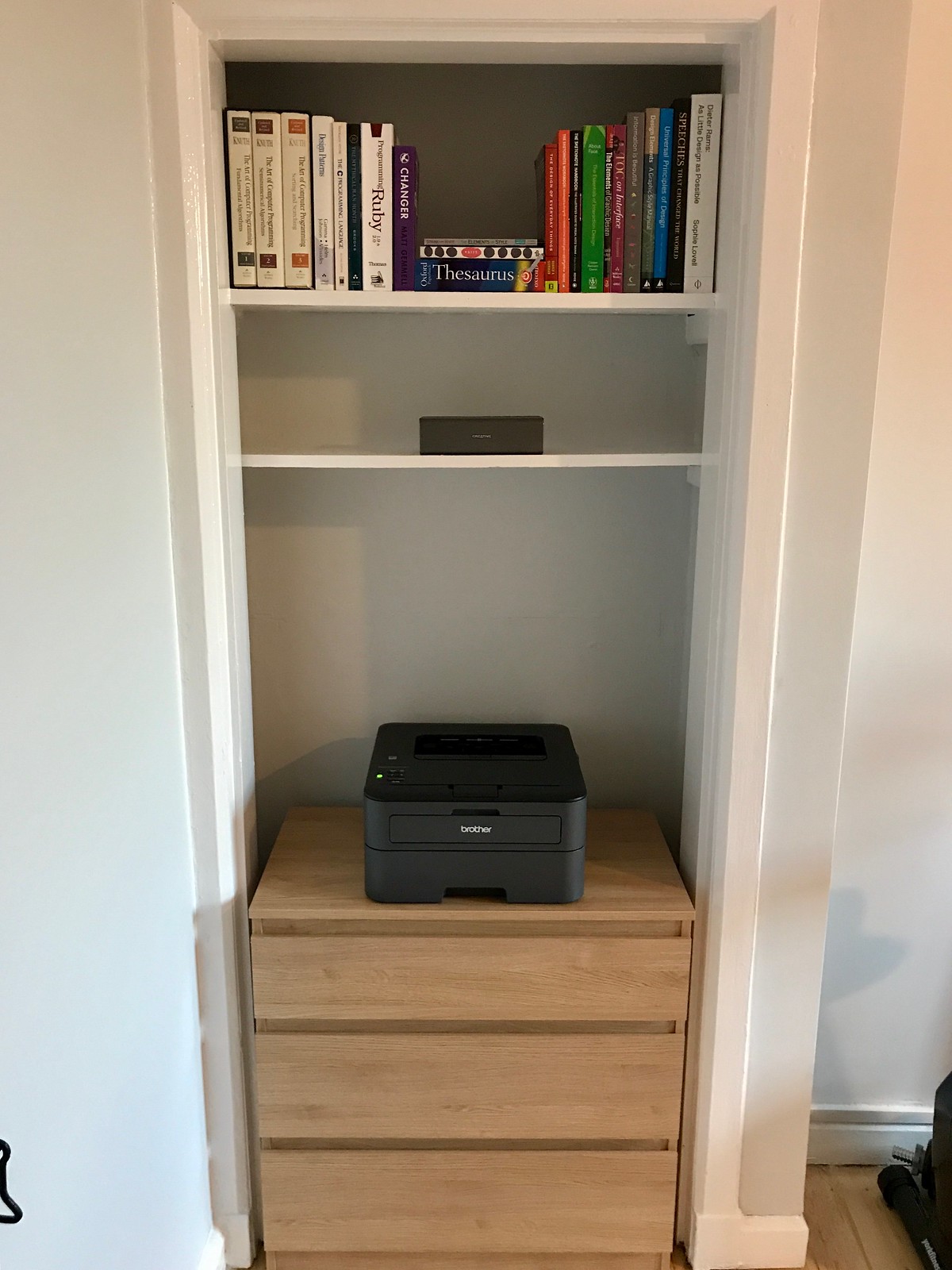 The top shelf of the press has a selection of books, including the classics of Computing Science that remind me of university, my previous career, where I came from, and my passion for order and logic. There’s also a series of design-related books that inspired and delighted me, and which I enjoy leafing through. In the middle, there are some nods to my new career, including my first novel, CHANGER. The relative position of each discipline is deliberate; writing a novel requires some of the skills from each of those two other fields, both of which had equal importance when I was writing code instead of words.

The second shelf holds a Sound Blaster Roar Bluetooth speaker, which delivers an amazing amount of bass, and impressive clarity in the high range. The mono laser printer is Wirecutter’s recommendation: the Brother HL-L2340DW. Both devices are wired in for power, with the cabling concealed. What’s more important, though, is the drawers themselves. 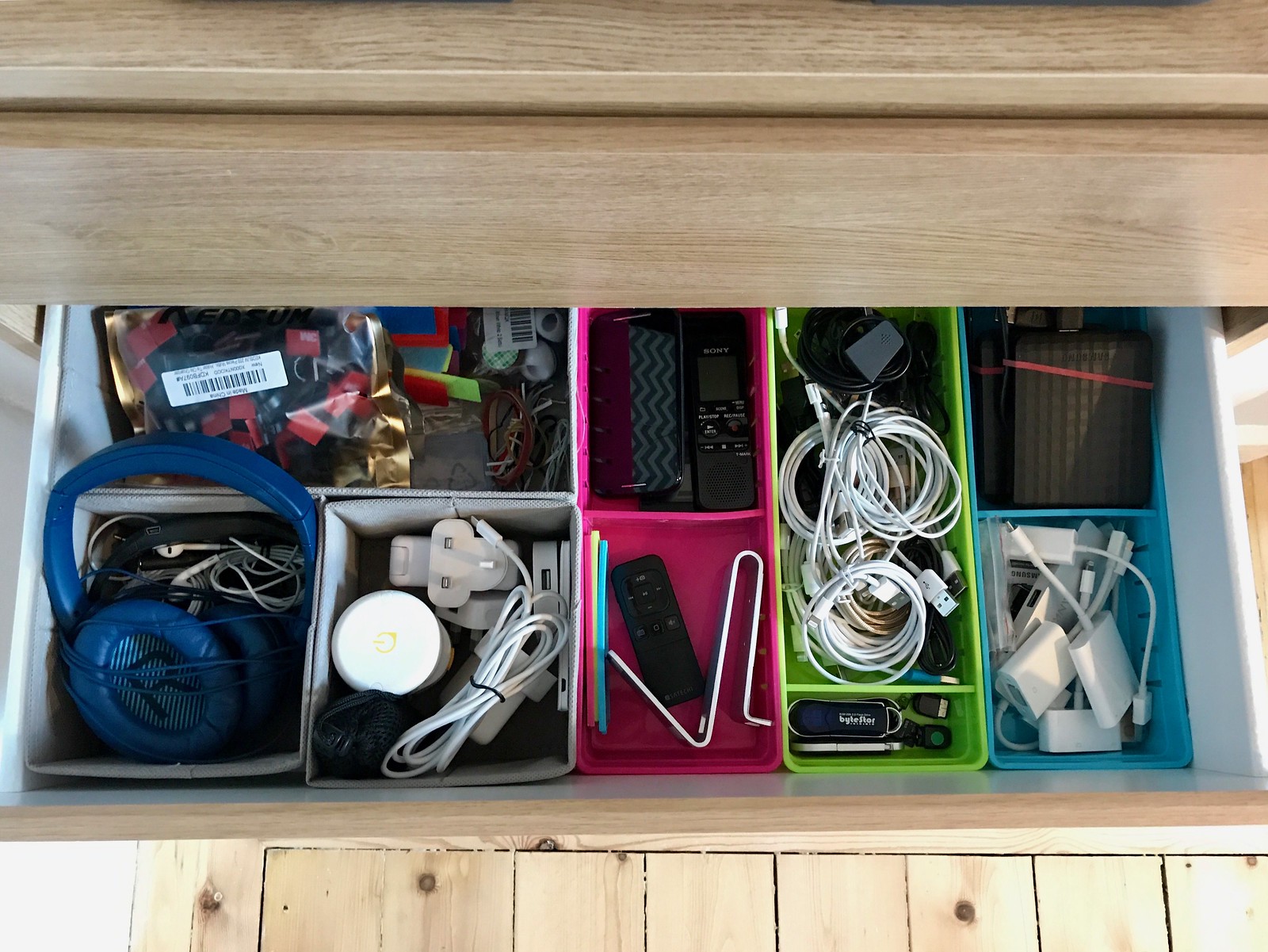 Mindful of the mess of the past, I bought a series of divider trays (with repositionable sub-dividers) and fabric dresser boxes, to carve up the space in the drawers and let me categorise and organise the various necessities of a modern home office — i.e. a lot of USB cables and white Apple adapters. The topmost drawer also has sections for personal items, stationery, and useful tools like a Leatherman, measuring tape, and LED flashlight. There’s some room to grow there, too, but any additions will have to earn their place. Concealed within, there are powered USB sockets to allow charging items with the drawers closed; I made those with USB plugs, USB male-to-female extension cables, and adhesive-mounted cable clips. 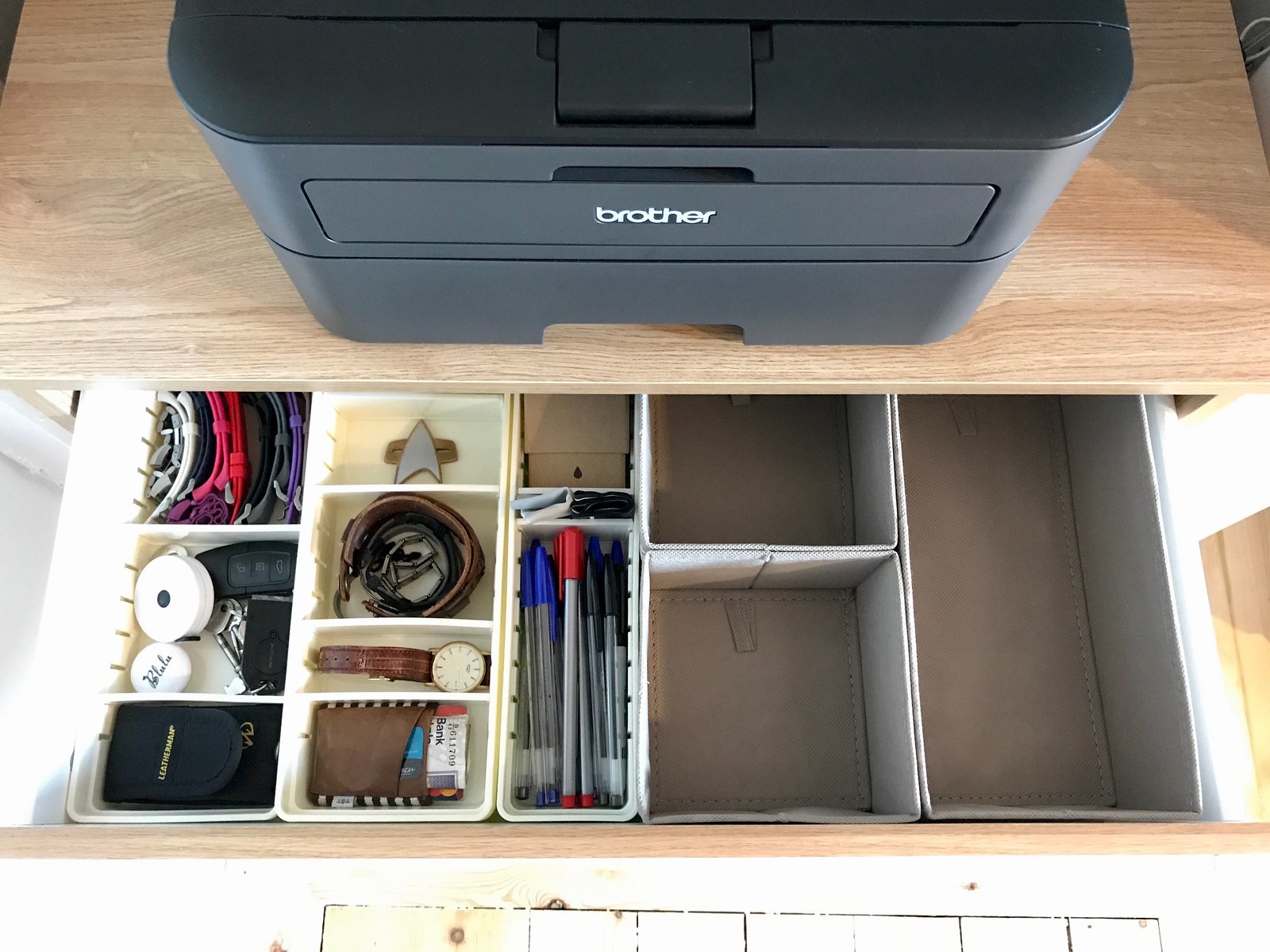 Since taking the above photos, I’ve made some more tweaks: motion-sensor lighting for the printer area (only active when it’s sufficiently dark — here’s a video of it in action), and I’ve also inlaid felt into some of the drawer compartments, to hold my watches, as shown below. The felt is purple, naturally. 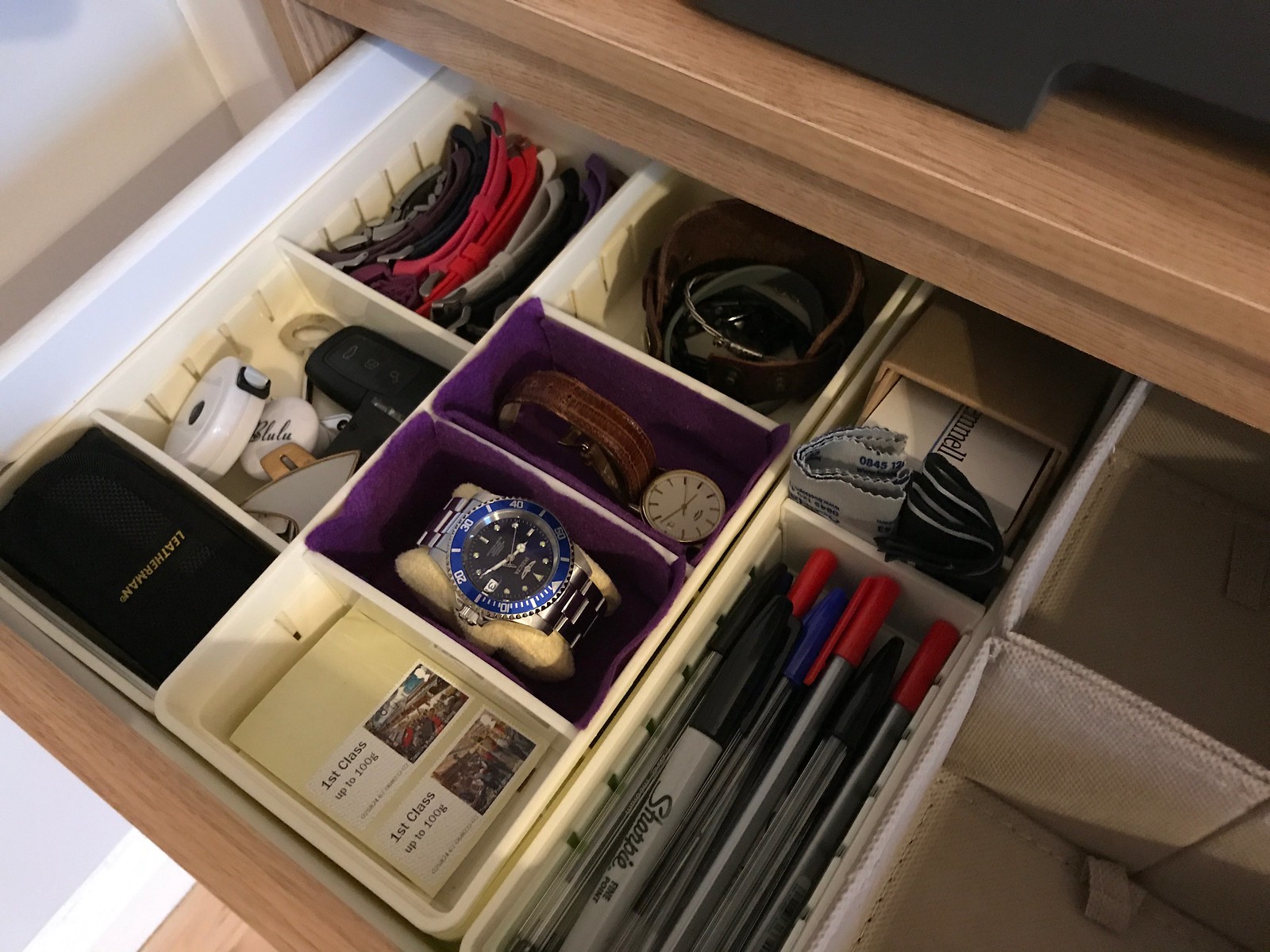 I’m thrilled with how it all turned out. It’s just what I wanted, and when I open the door in the morning and walk in there, hearing Whisky’s claws clicking on the floor beside me as he makes for his new bed just behind my work area, I feel both energised and relaxed. My focus is immediately on the desk, with the calming vista of the grass hillside out beyond the window, curving down towards the river. The space outside has always been inspiring, but now the space inside no longer pales in comparison.

It hasn’t been without stress and hassle, but it was absolutely worth it. I have a room that fits with my evolving sense of what I need from an environment for productivity, and I’m confident that it’s a place where I can get the next phase of my work done. 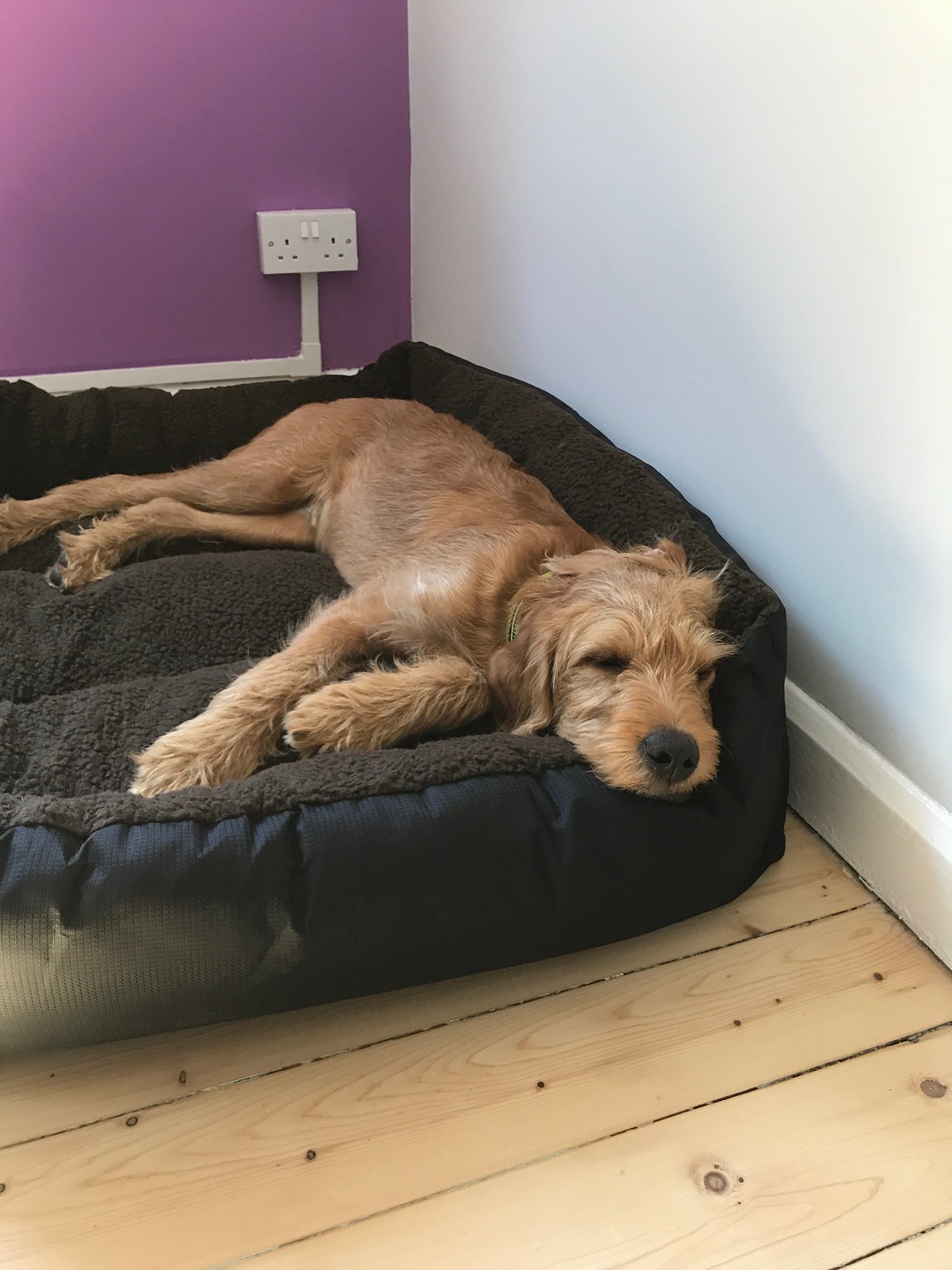