I try to keep a very spartan desk, but lately I’ve taken to displaying a couple of objects beside my iPad. Here they are. 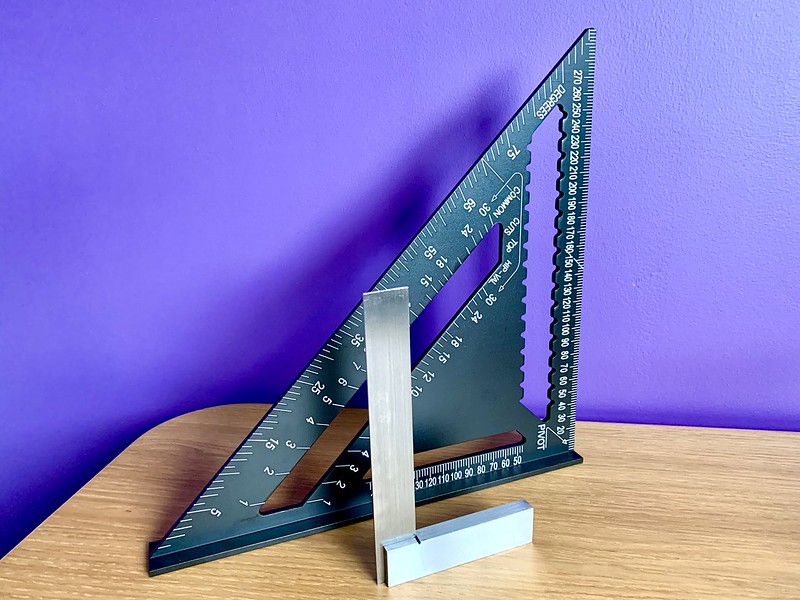 The silver thing at the front is a machinist square, or an engineer’s square. It’s the metalworking equivalent of a woodworker’s try square, which is what I actually use it for. I just appreciate the aesthetic more than the typical try square’s wooden handle. The larger black object behind it is a rafter square, commonly known as a speed square. They’re both for checking perpendicularity, marking materials, and the speed square has various additional conveniences.

So why do I have them?

They sit on a desk that otherwise holds only highly sophisticated electronic technology: a 12.9-inch iPad Pro, a custom mechanical keyboard, and a Sonos Move smart speaker. By comparison, the squares are primitive; just chunks of solid metal.

At the surface level, the unifying factor is that they’re all elemental and beautiful tools, exquisitely made. A lot of my affection — and sense of emotional connection — to an object comes from its appearance of intentional indivisibility. It’s one of the many reasons why I could never have the same reaction to a laptop as I do for my iPad.

But there’s more to it than that. The squares remind me that tools can be versatile in ways you often don’t expect, and that well-designed objects can provide a surprising sufficiency. I’ve found it’s often better to use what you have, instead of trying to find something new that might be notionally better suited, however counterintuitive that might be.

Finally, and most importantly, the squares remind me that while tools can be beautiful and filled with potential in the abstract, they are ultimately only a means to an end. They are only tools, and tools unused are purposeless.

I’m prone to fixate on the means, rather than the goal — sometimes as a way to avoid the goal. The flexibility of digital tools can be their greatest weakness, capturing too much attention with their orthogonal possibilities.

Those aspects are a trap, and the trap doesn’t exist with a hammer, or a screwdriver, or a try square. Ostensibly simpler tools have only two real modes: used or not.

Keeping them here, ever in my peripheral vision, reminds me that the work should always be the focus.