The University of Glasgow has some magnificent buildings, but The Boyd Orr Building (known affectionately and universally as the Boy George) is not among them. Indeed, it’s widely accepted to be the ugliest building in the university.

I’ve spent untold hours in there, during my Computing Science degree. We had some lectures in the building, but mostly my time was spent in the various labs upstairs. I whiled away a big chunk of each week of term-time in those labs, then when the Summer of 2004 arrived (after the third year of my degree), I thought I’d take a break.

I was sitting at home when an email came through on my academic address mentioning a couple of Summer scholarships, to work on research projects for the department. I left the email sitting in my inbox for a few hours, then decided to make a phonecall.

A few days later I had an orientation meeting with my supervisor, then walked into room F091 in Lilybank Gardens to begin work. I decamped back over to the Boyd Orr the following week, and hardly left for the entire Summer. I made new friendships that have stood the test of this past decade, and strengthened existing ones.

I also met a girl, on that first day, in F091. I was very recently 25, and she was soon to be 20, but she was only in the year below me (since I returned to university to get my degree after a few years working in the software industry).

As I publish this article, it’s about 14:05 (UK time) on the 22nd of October, 2014. Ten years ago, to the very minute, I was sitting in the little Café Picolino on the ground floor of the Boyd Orr, nursing a coffee and probably an empire biscuit, and having a serious conversation with the same girl. We’d been friends for the past several months, but it was at this moment that we decided to try being together.

And try we most certainly did. Here we are, back at the Boyd Orr with the café’s sign visible in the background, in May this year. 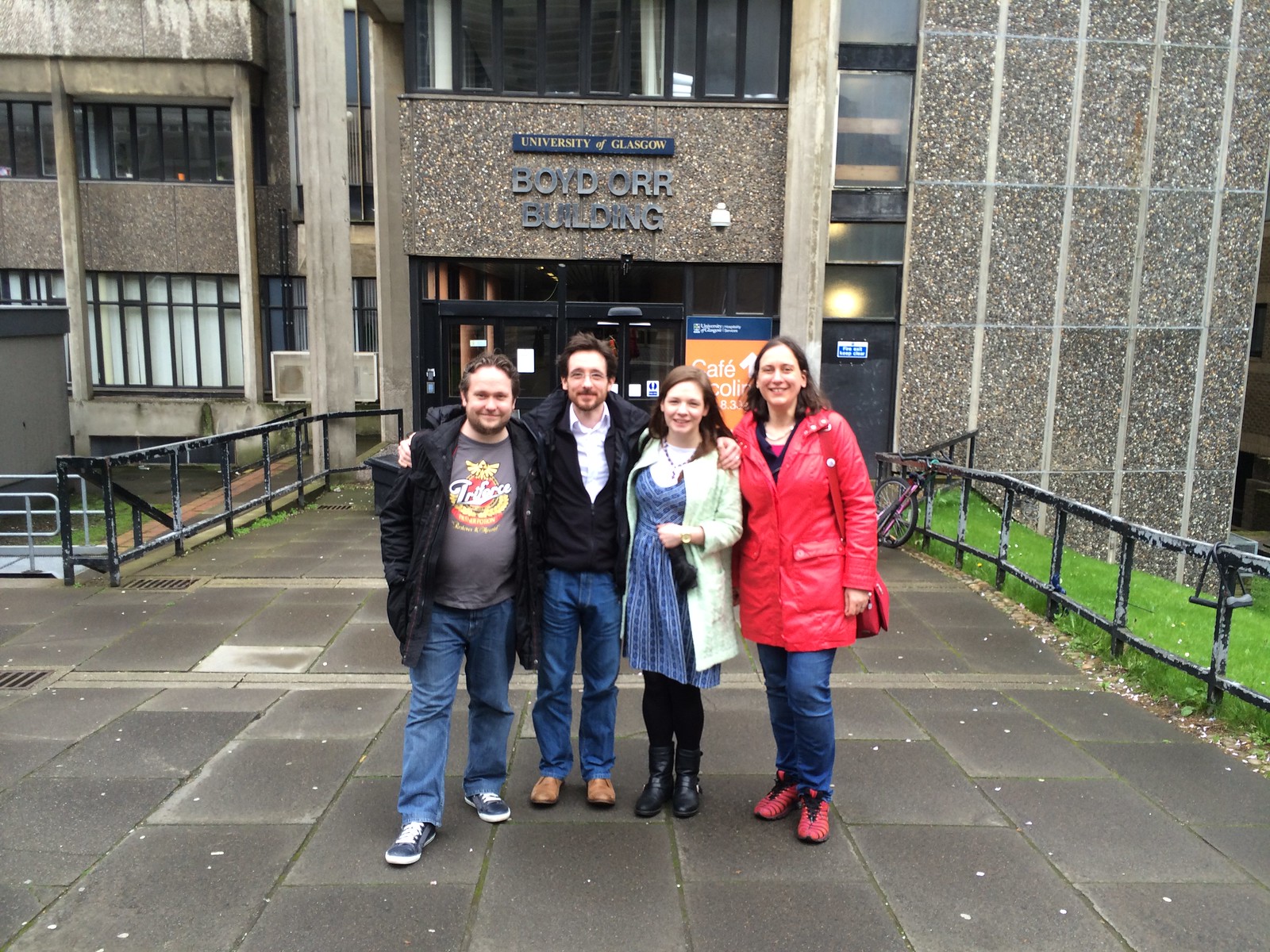 From left to right: James Thomson (of PCalc, DragThing, and OS X’s Finder and Dock fame), me, Lauren, and James’ wife Saskia. James and Saskia live just a minute or two away, and are also Glasgow Computing Science alumni. The photo was taken by Jim Dalrymple, after we finally managed to drag him out of a guitar shop.

Two weeks from now, also to the day, Lauren and I will celebrate the third anniversary of our marriage.

She’s still my friend - my best friend, by far. I’m still working on internalising the fact that she’s my wife now, because she impresses the hell out of me. Intelligent, talented, patient, gentle, and heartbreakingly beautiful to my eyes. I truly admire her, and I don’t mind telling you that she’s one of my heroes.

There’s a worn, faded post-it note on her dressing table in our bedroom, the edges curling in on themselves, on which I wrote “#1 favourite human”.

All things considered, it’s been easy for us, and maybe that means we’re lucky. The more I think about it, though, the more I realise that it’s only been easy because we haven’t taken it for granted. Relationships take work, and you should love your work. When you do, it doesn’t seem like work at all. That’s the only secret I can offer you, but it’s a damned good one.

It’s a decade later, we’re here, we’re stronger each year, and that’s why.