I offer a membership option for this site, which comes with some cool benefits including an email newsletter every Monday morning (with an exclusive essay, and behind-the-scenes info on my current writing projects, amongst other things).

Because my beloved members support my writing during the long periods between releasing novels, finding a workflow for preparing the weekly newsletter was my first priority for going iPad-only.

Here’s how I’ve always prepared the newsletter before, on my MacBook:

It’s a little dorky, but it works well. The advantages are that I can keep everything in Markdown files in my Dropbox, and I also don’t have to mess around with MailChimp’s slightly janky web-based visual email editor, which gives me a headache. I just paste in the fully-formed HTML (which has some MailChimp variable-markers in it, from my HTML template), and it’s done.

Now, yes, there are less convoluted ways I could do all of this. I don’t have to use Markdown, and I don’t have to use my own full HTML template. I don’t have to use scripts, or macros. But my background is in tech, and I’m a power user and tweaker. I naturally think about tasks in terms of customisation and automation. I’m not sure that’ll ever change. So, even though making a weekly email newsletter from scratch probably isn’t a task that many other people do, it does serve as a kind of litmus test for how readily I can transfer my working style from a Mac to an iPad. That’s what this series of articles is all about, after all.

And it was easy!

I have one word for you, and it’s a word you’re going to see again and again here: Editorial. It’s the cornerstone of a lot of my iOS workflows, and it’s brilliant. Federico Viticci wrote a bloody book on it, and deservedly so. It’s essentially a text editor with extensive automation capabilities, but then a car is essentially a metal box on wheels.

At time of writing, Editorial was last publicly updated in June 2015, but the new version is in private beta right now. So, don’t worry about it being abandonware; it’s not. The version from 2015 is the one I’m using, and it works just fine.

In a nutshell, when I’m making a new newsletter issue, Editorial does the whole thing — with the obvious exception of the final couple of minutes of pasting stuff into MailChimp (but Editorial does put the HTML on the clipboard for me). And come to think of it, MailChimp has APIs for various things, so maybe I could even automate the last part too — but I’m not quite that crazy yet. I can live with two minutes of fiddling. It’s like a ritual of closure.

There are two main aspects to how I get things done in Editorial:

I won’t cover workflows in detail here, but Federico’s article dealt with them extensively. You can also read the documentation. Note that, if you want, you can even write full-blown Python scripts, or build custom user interfaces with buttons and checkboxes and all that stuff. Oh, and it can use your TextExpander macros too; even the fill-in kind that produce input dialogs. It’s ridiculous. (Seriously, why don’t you have it yet?)

I have two workflows that I use when making newsletters: my Newsletter document template (even templates in Editorial are workflows, so you can do things like automatically name the file appropriately, insert boilerplate text including dates and variables, use the clipboard, position the insertion-point, and so forth), and my Newsletter to HTML workflow which does all the magic. So, I just tap, write for a while, tap again, then spend a couple of minutes finalising things at MailChimp.

Here’s a screenshot of my Newsletter to HTML workflow. 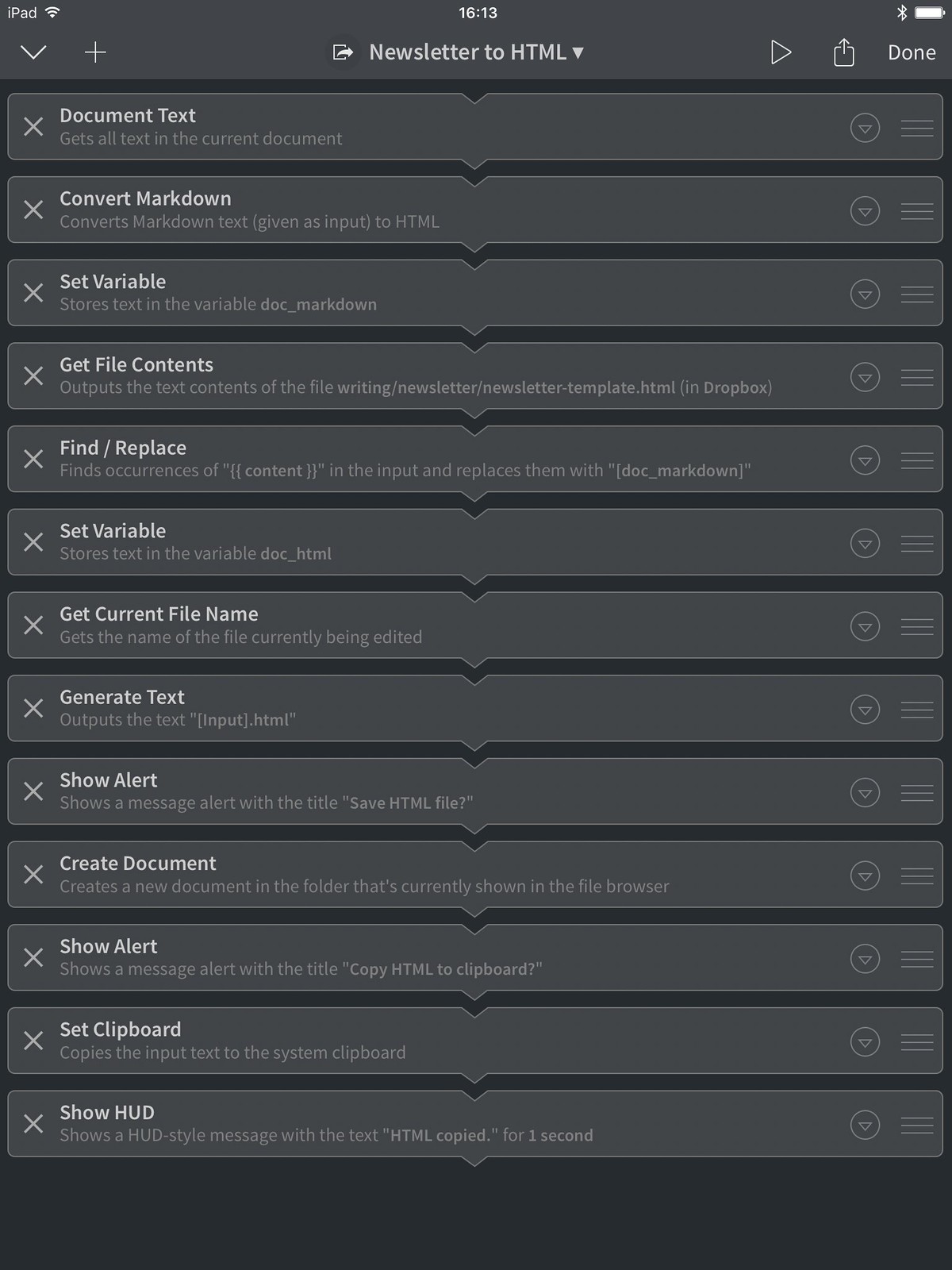 I can still jump out to Byword for the actual writing part (everything is in Dropbox, remember, so I can use whichever Dropbox-savvy app I want as an editor), but mostly I just stay in Editorial from start to finish.

It’s compelling, and it’s actually less hassle than on my Mac. This is a theme you’re going to see again and again. I can do real, proper work on the iPad, without sacrifices.