I write books, and writing is one task that the iPad is ideally suited for. Even the on-screen keyboard is very usable with practice, though you’ll certainly want a physical keyboard for serious typing, and there are a wealth of apps available to help you get words down in a focused environment.

For years, my writing tool of choice on the Mac has been Scrivener, and the iOS version was released at last in July this year. It’s how I work on novels on the iPad. Let me tell you a bit more about it.

Scrivener on iPad offers most of the organising, writing, and editing features of its big brother on the Mac. Even the cork board is there, and the sidebar (or Binder, in Scrivener’s own terminology) can be used for rudimentary outlining — but you’re much better off using a dedicated tool like the unmatched OmniOutliner for that particular task.

The actual writing experience is delightful, as you’d expect. A dedicated full-screen mode is available, or you can equally keep the Binder visible (narrow or wide), or open a different document in that panel to refer to. Here’s how it looks when editing full-screen. 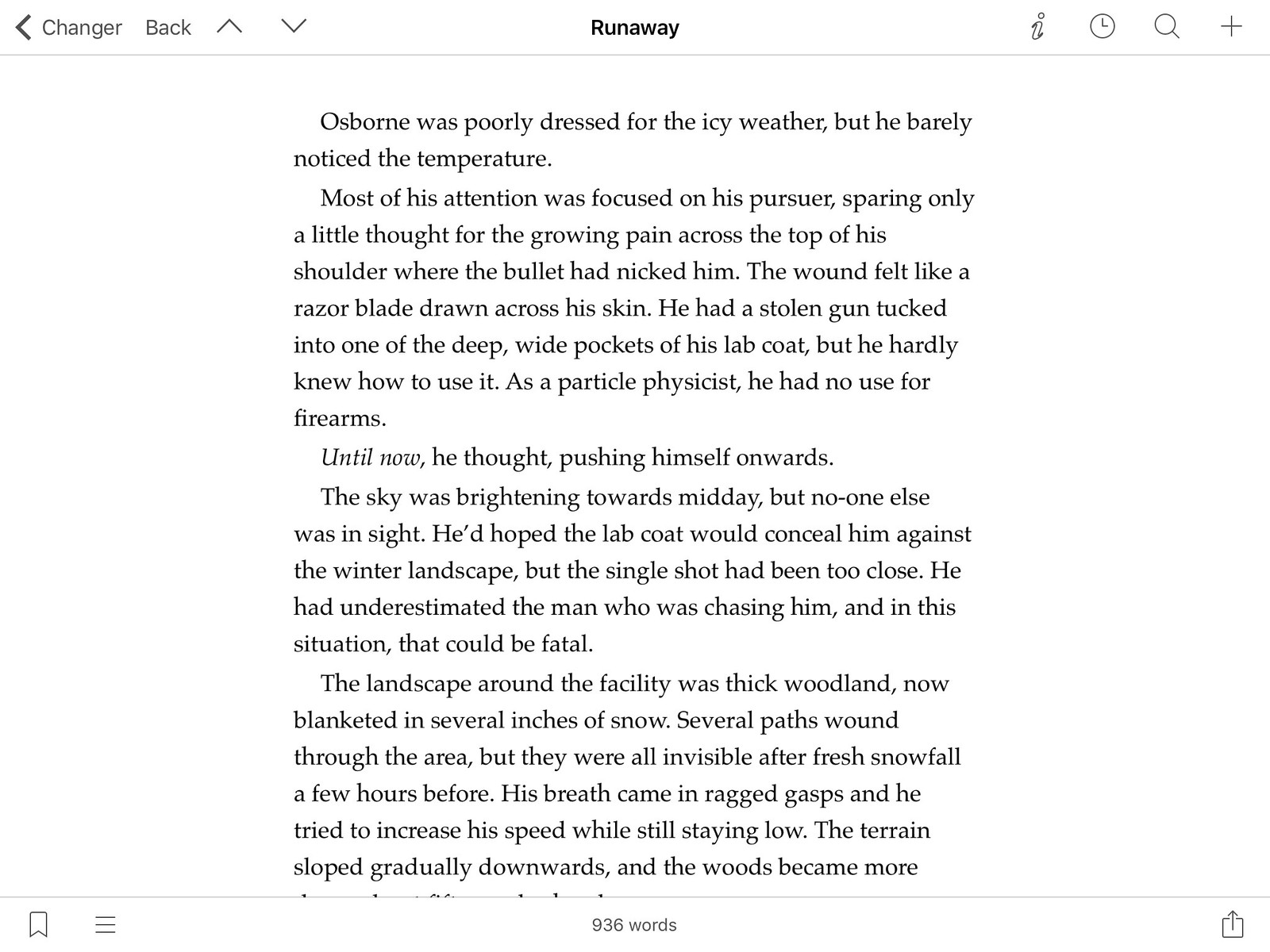 The novel pictured is my own CHANGER (since you ask). And here’s a screenshot of Scrivener with the sidebar and Binder visible. 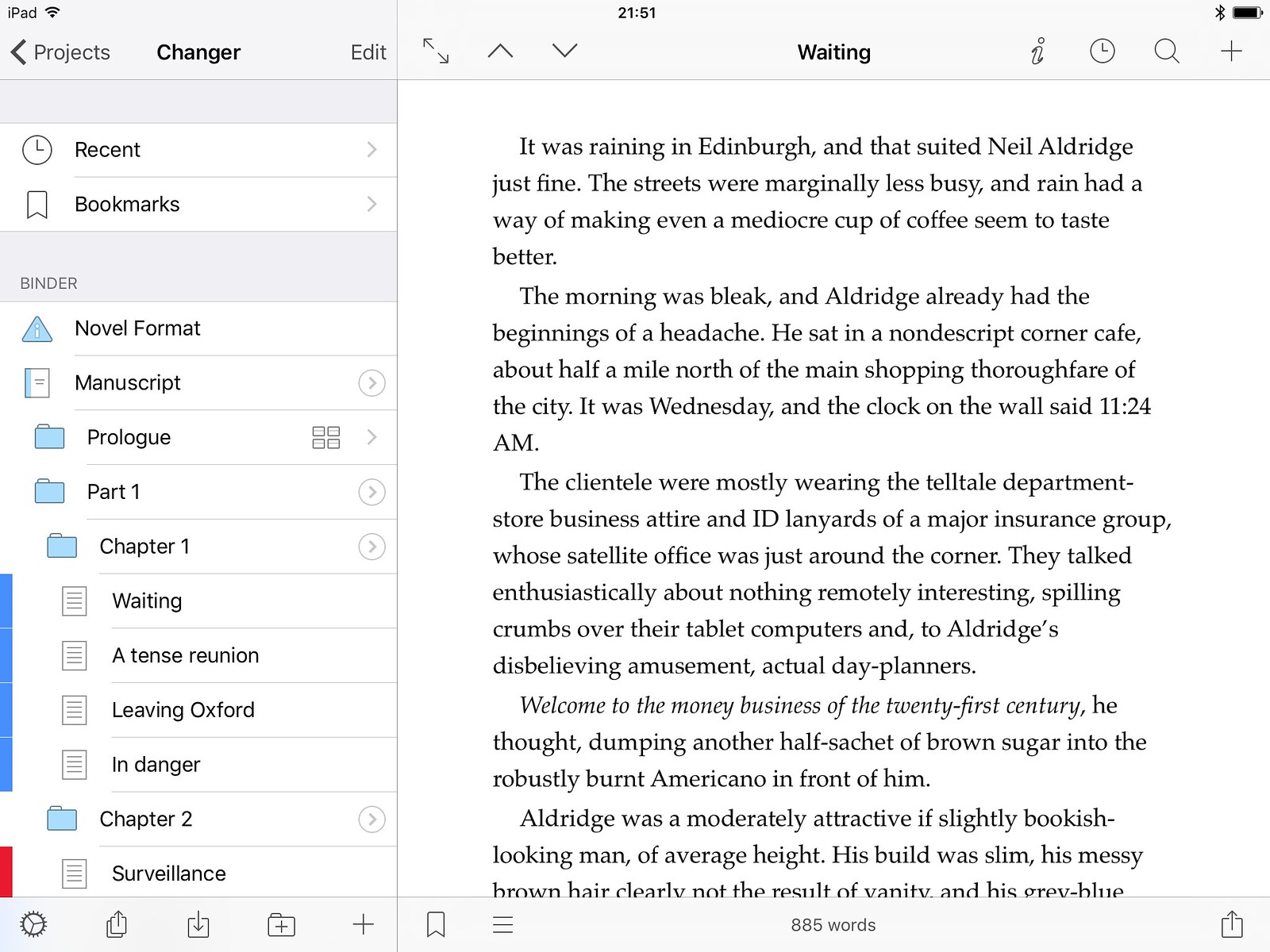 The editor is rich text, offers typewriter mode — which keeps the line you’re currently editing at a fixed point on screen — and supports common keyboard shortcuts for formatting. It can also preview the collated full text of your manuscript in-app, without requiring export first.

What it doesn’t have, though, is all of the Mac version’s Compile functionality, to format and collate your manuscript ready for export. It can generate PDF, Word, RTF, and plain text formats, but not ePub (though you can open the Word format directly in Apple’s Pages app, which can then generate ePub files on the device). Significant customisation of Scrivener’s output is possible via SCOMP files (Scrivener Compile Appearance), which you can add and edit within the app itself; it’s a YAML-based format, with full documentation included. Users of the Mac version of Scrivener will recognise many of the options available (folder-level title formatting, font overrides, text transformations, etc), but there’s no UI for any of it in the iOS version — it’s strictly via the configuration files alone. I’m already very familiar with YAML since my blogging system, Jekyll, uses it for article metadata. You’ll find it very straightforward.

Given the lack of direct ePub support, Scrivener on iPad naturally also can’t make use of KindleGen to produce mobi files on its own like the Mac version can, but if the Kindle Store is your distribution channel, note that the KDP portal accepts ePub files too, and will convert them to the mobi format for you automatically. Thus, with a suitably-customised SCOMP file to export a Word document from Scrivener, then running it through Pages to create an ePub, you can have an ebook-production workflow entirely on the iPad.

Getting print-ready output may take some more work. The SCOMP files don’t support the full range of typographic and layout control of Scrivener’s Mac version, so you’ll need to experiment to see if you can get what you need. I can at least tell you that custom page sizes and margins (including mirror margins), starting chosen folder-level titles/texts on recto pages, and verso/recto running heads and folios, are supported. I’ve seen people saying that they’re not; I can only assume those people didn’t actually read the SCOMP spec closely enough. There’s no widow/orphan control, though, as far as I can see, or automated text-replacement, but there’s a lot that is available. You can probably get quite a long way towards what you want. I advise spending some quality time creating your own configuration file, and seeing what’s possible.

I was asked by a reader about spelling and grammar checkers. While Scrivener does (optionally) participate in the system-wide “wiggly red underline” spellchecker, there’s no grammar checker available. I haven’t researched other options for this, because truthfully I use neither feature. That’s not a boast, and my proof readers know that I make my fair share of typos and errors. I just try to catch spelling errors during proof-reading and editing, and I’ve never used grammar checkers. I can understand that they might be of some use if you’re not a native speaker of the language you’re writing in, but for fiction, they produce so many false positives that they’re almost useless to me. They don’t allow for flexibility of style, deliberate sentence fragments, interrupted thoughts, and so on. I don’t think the technology exists to do it in a way that’s suitable for fiction, with informal speech, vernacular, and just the craft of making prose that flows and engages. For business documents, absolutely; take whatever help you think you need. For novels, grammar checkers are highly dubious, in this writer’s humble opinion.

(What would be of benefit is the kind of visually-highlighted linguistic analysis that the Mac app Marked 2 provides. I’d be interested in an iPad option for that functionality — even though it’s soul-destroying to see the evidence of weak-adverb proliferation writ large ‘pon your beloved manuscript.)

Scrivener on iOS is still young, and not without its minor bugs here and there (some fixes coming soon!), but it’s a beautiful, richly-featured, and focused distillation of what makes the Mac app so great. I personally think it’s a superior writing environment to its elder sibling too.

If, like me, you have a strong preference for using rich text when writing fiction — complete with native italics, automatic smart quotes, first-line indents, and so forth — you owe it to yourself to give it a thorough shot.

It would be downright rude not to also mention the excellent Ulysses here. It’s a writer’s workshop too, through and through, and provides a remarkably similar overall workflow to Scrivener: projects and folders and files; documents and notes and metadata; exporting with styles; and robust sync with its desktop counterpart. It’s wholly worthy of your attention, but it’s also a different beast.

Ulysses is a Markdown app (you can write in different formats, but Markdown is the default), so you’ll be using plain text rather than Word/Pages/TextEdit/Notes-like rich text. Ulysses cleverly goes some way towards bridging the gap between the two, by displaying Markdown-emphasised text in italics alongside the underscores, and double-asterisked text in boldface too. Headers are suitably larger beside their hash-symbol prefixes, and various types of annotations are supported, like footnotes, comments, links, and images. There are also per-document notes, writing targets, metadata tags, and associated images — though these features are unavailable if you’re using Dropbox as a file store rather than Ulysses’ own internal (and iCloud-synced) library.

Its editing mode is always full-screen, not providing an in-app two-up view for reference (and document-specific notes are in a slide-over UI that doesn’t really afford simultaneous work and reference). However, it does participate in iOS’ split view functionality with other apps. Like Scrivener, it supports typewriter mode. 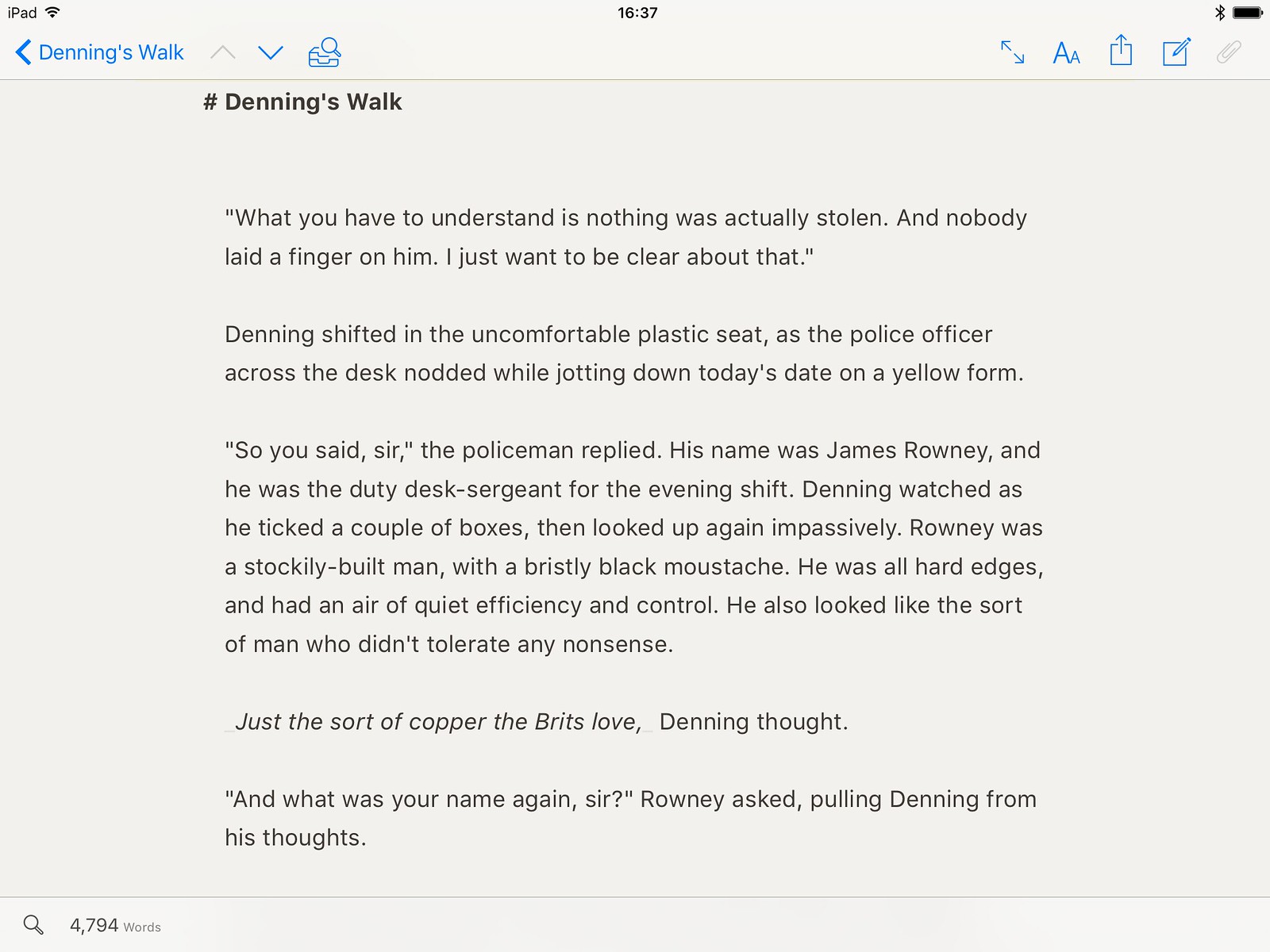 Ulysses supports exporting to HTML, plain text, PDF, ePub, and also publishing directly to Medium or to WordPress (either the hosted variant or your own installation). Both the editor’s theme and the various export formats are all very customisable, though you’ll have to use the Mac app to actually create or edit these yourself (technically, you can make and import an editor theme or a PDF export theme wholly on an iOS device — both are stylesheets; one in actual CSS, and the other in Ulysses’ own very-similar and well-documented syntax — but the ePub custom export style format is a Zip archive with an undocumented property list embedded beside the CSS and preview images, so you’re on your own there). There is, though, an online theme and export style archive, from which you can download others’ submissions directly to your Mac, iPhone, or iPad.

If you prefer to write your long-form fiction in Markdown-flavoured plain text (or Textile’d, or Minimark, or even other markups you add yourself — again, via the desktop version and iCloud sync), and/or you like the idea of being able to fully preview not only your PDF output but also your ebooks right there in the app, you should certainly give Ulysses some seriously thought. If you have a Mac, there’s a trial version of the macOS app which gives you a very strong sense of what to expect on iPad too; Ulysses’ UI and interaction flow is virtually identical regardless of which OS you happen to be using it on.

The distinction between Scrivener and Ulysses is ultimately a personal one. Try both on a Mac if you can (and do read through the excellent and entertaining included tutorials in each case), and see which writing paradigm you like most. You’ll be spending the vast bulk of your time writing and tweaking text, after all, so that’s the activity on which to primarily base your choice.

That’ll do for now. Writing has always been readily possible on iPad, but these days we have tools that allow planning, organising, writing, editing, and compiling manuscripts for publication. It’s a very exciting time, and the iPad’s focus and exceptional portability make it a highly attractive tool for the contemporary author.

Thanks for reading, and I’ll see you again next time. To stay up to date, it would be the very wisest of decisions to follow me on Twitter.