“You can make a wish, but it’ll only come true if you don’t tell anyone.”

That’s what my mum always told me when she found a stray eyelash on my cheek. It was a compelling idea, and the element of secrecy made it all the more alluring.

Her particular version of this common ritual was that you put the eyelash in your palm or on the tip of your finger, close your eyes, and make the wish whilst blowing the eyelash away.

As a child, I appended an additional stipulation that seemed logical to me: when you opened your eyes, the eyelash had to be gone. If you could still see it anywhere, you had to repeat the whole process. In later years, I made the optimisation of averting my eyes before I opened them, ensuring I wouldn’t see the eyelash even if it was still nearby.

It’s all superstition, of course. Blowing away an eyelash has no effect on the future. Touching a piece of wood doesn’t ward off ill fortune. Wishes themselves, or prayers, are empty pleadings - heard by no-one, and unable to alter outcomes in any way. They may make us feel better, and that’s something to be considered on its own merit, but there’s no other effect. We all know this.

I was standing in front of the bathroom mirror about three weeks ago. It was late in the evening, and completely dark outside. My reflection was lit by the vaguely sickly light of energy-efficient bulbs, but I wasn’t looking at it. My attention was focused on the eyelash in my palm.

I’m a scientist. The mechanistic, systemic, orderly nature of the universe is evident to me. I’m certain that evolution (based on random, iterative mutations and consequent survival) is the genesis and history of all life. There is no ultimate observer, and certainly no caretaker. No-one to hear appeals, or pleas. I willingly sacrifice irrational emotional comfort in order to feel some certainty about my surroundings, and I find ample wonder in what’s real.

I considered the eyelash carefully. It was itself an emblem of how ephemeral life is. Many small cycles of renewal, each eventually ending, within many larger ones. A perpetual dance with no intrinsic importance; motion and existence and constrained chaos for its own sake.

I enquired whether my own inner voice of reason might have any remarks befitting the situation, but it was unusually silent. It seems that rationality has limits, at least when employed by emotional creatures. So I raised my palm in front of my mouth, and closed my eyes.

My father will not have lung cancer, I thought, and blew as hard as I could.

Three leisurely weeks went by. I wrote about my struggles with anxiety. Many of you emailed me, or responded on Twitter or ADN. Everyone was incredibly kind and supportive - I cannot adequately express my gratitude. I even saw a doctor about it. Then I went on a much-needed holiday for a week with my wife.

Several times, I came very close to mentioning what was going on with my dad. I even had a tweet drafted at one point (how crass that phrase sounds in this context). But I didn’t tell anyone; not even my closest friends.

It’ll only come true if you don’t tell anyone.

There is no deity to hear a prayer. No sprite or embodiment of the natural world to consider a wish. I’ve written before about my deep dislike of religion, and my disdain for the wretched, pitiful self-projection of so-called spirituality. The universe just doesn’t work that way, according to all available evidence.

It’s amazing what you can talk yourself into.

Well, maybe it’s a probability manifold, I think to myself. If you tell everyone, they’ll assume the worst, and then that outcome is much more likely.

How elegant and pseudo-scientific. It’s the same bullshit as before, until anyone conclusively proves otherwise. Just getting down on your knees and clasping your hands before nebulous science, instead of nebulous entities.

But still I told no-one. Cognitive dissonance is available on demand, no matter the time of day or night. Fear is the mind-killer.

There are some beautiful churches here. Most churches have a certain beauty, of course. When I look at them, that’s the first thing I see. Then I feel a wave of anger and sadness at the sheer emptiness and waste and pointlessness of these temples to self-deception. The cold, comforting certitude of superior reason.

I’ve walked past churches during the last three weeks. They felt subtly different. This time, I could feel the trap. The descent that begins with “it can’t hurt”, then falls through fear and desperation towards credulity: a sacrifice of self, in exchange for illusory hope.

There were moments where a voice in the back of my mind whispered the price, and it seemed like a bargain. I realised that there are people who would have this experience and believe it was supernatural, rather than an echo of personal fear.

I ran away, knowing it was only myself I was fleeing from.

We returned to Edinburgh the night before last. My father had been for further tests, naturally. We were still waiting for the results, but he had some time off work so we’d arranged for him to come through from Glasgow and we’d all go out for dinner: dad, my wife and I, and my brother Martin and his fiancée.

We won’t be morbid, I assured myself. It’s just dinner. We don’t know anything yet.

My mind imagined both outcomes, then I chastised myself for it. Positive thinking only - another superstition.

Dad arrived at my brother’s house, and I planned to drive out to meet them later. Before I left, I exchanged messages with Martin.

How does he seem? Does he look well?

He seems fine. He says he’s been feeling much better.

I was just about to get into the car when I heard from Martin again. Dad had received a call from the doctor, with his results.

My father will not have lung cancer, I thought, my mind skittering away in all directions. No cross to grab, no deity to beseech. Only inevitable motion and progression, in whatever quantum universe I happen to inhabit.

The great gears and pulleys of the world shuddered for a moment, then resumed normal operation. My father does not have lung cancer. My father is healthy.

I got into the car, and drove through this now-acceptable reality.

Dinner was well-timed - it had become a celebration. Here’s my dad, last night: 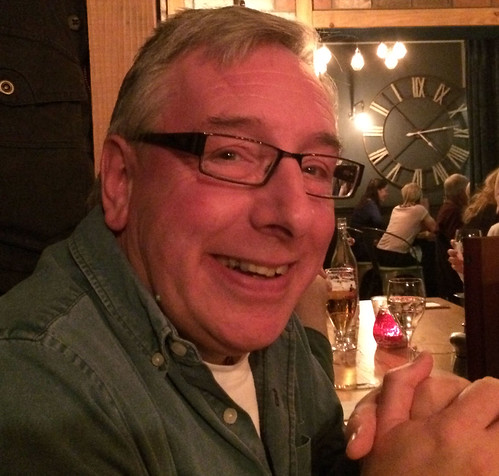 I messaged him earlier today too. He’s enjoying his weekend off before going back to work on Monday. I wonder if the last few weeks even really happened. My brain is busily papering over cracks, and filling holes with calming vagueness.

Dad told us last night how relieved he was. That’s not like him; he keeps his problems to himself. He’s a strong man, of the old-fashioned type. I wish I had a quarter of his composure. It’s strange to simultaneously yearn for and dread those moments of vulnerability.

He said he’d been thinking about taking the motorbike in for a full service, and to get some parts replaced. “In case you two were going to be selling it,” he said simply.

No-one lost control. No tears were shed (publicly, at least). But that’s probably the most real-as-in-terrifying thing my father has ever said to me.

We responded as people do - or perhaps just as men do. We told him that if he thought we were going to go easy on him tonight just because he’d cheated death, then he’d better think again. We mocked each other’s taste in music. We called each other’s dress sense into question. We laughed, shrilly, as we desperately needed to.

We whistled past the graveyard, taunting mortality ever more loudly, now that it was comfortably distant again. For the moment.

We went into a pub after the restaurant, across the street from a magnificent old church of grey stone. “Real Hope in Jesus” proclaimed the banner on its noticeboard. It was a Friday night in the city, and the church was closed up, unlit and silent.

It said nothing at all to me.

It was safe to disdain, and to pity, once more.